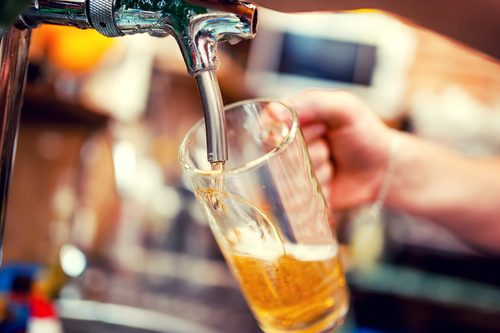 Every now and then, a glass of wine or beer is such a pleasure. With dinner, it’s that little something extra to toast with or bring out the flavors of your meal. At a pub, sampling a craft brew is a conversation-starter with friends and family.

I’m convinced that an occasional glass of alcohol is good for us. I know that social drinking is very much a part of our culture and how we enjoy those special meals and celebrations. Personally, I can’t imagine New Year’s Eve without something bubbly when the clock strikes the midnight hour (if I’m still awake for it!)…

So when I hear of studies about the benefits of alcohol, I think there’s a positive message to pass along – always in moderation, of course.

Red wine, as you may know, has had plenty of attention because of the antioxidant compound, resveratrol, found in the skin of red grapes. It’s known to protect the lining of blood vessels in your heart. You can also get this particular antioxidant from eating the red grapes themselves, along with blueberries and peanut butter.

Scientists are not saying to make sure to include red wine in your daily diet, but the research is in favor of a glass now and again to help protect against heart disease.

RELATED READING: Brushing and flossing are good for your brain?

The latest research is about beer. Scientists have identified a compound from hops, the flowers of the hop plant used to flavor and preserve beer, which could prevent brain cells from damage. So the potential is there for slowing the development of brain disorders like Alzheimer’s and Parkinson’s diseases.

The study by chemists at Lanzhou University in China, published in the Journal of Agriculture and Food Chemistry, looked at a compound in hops called xanthohumol, reputed for its antioxidant abilities, cardiovascular protection and anticancer protection. The research focused on testing xanthohumol’s effects on brain cells.

Let me take a step back here and explain something. Oxidation is normal, from environmental toxins to our body’s own processes, oxidation takes a toll on our cells. We can’t avoid it, but the stronger we are and the more antioxidant power we have, the better off we are when it comes to staying healthy.

We do know that oxidative damage to brain cells contributes to the development of diseases that originate in the brain, like Alzheimer’s. So if scientists could find a way to guard these cells from this type of damage, they can help prevent disease – or at least slow it down.

With laboratory testing, the researchers found that the compound could protect brain cells and, as a result, be a good way to fight against these serious disorders.

If you’re opening a bottle of Bud Light right now, I wouldn’t be surprised! But remember, alcohol in moderation only.


Hops have a history of medicinal use

Interesting to note, hops have been used in traditional Chinese medicine to treat a number of illnesses for centuries, such as digestive problems and insomnia. They have natural sedative properties.

In other good news, the main message from the European Beer and Health Symposium in beer-happy Brussels last fall was “moderate beer consumption” is a surprisingly healthy activity. Mind you, the symposium is supported by the Brewers of Europe. But reports from speakers there tout beer’s health benefits. Researchers say, along with the hops, the malt in beer also makes it a good source of polyphenols, those disease-fighting antioxidants.

RELATED READING: Do you know when it’s time to sleep? Your brain does

Another bonus, one British doctor said, is that beer is lower in calories than other alcoholic drinks, and it offers an important source of vitamins. The average British man takes in about 16 percent of his daily vitamin B6 from beer. Other sources, just to note, are fish, bananas and pistachio nuts. (We do know beer and nuts go well together, too!)

On the downside, another paper pointed out that beer drinkers tend to prefer more unhealthy foods, consuming more meat, margarine and bread, and less produce, than those who don’t drink beer.

My take is, if you’re eating plenty of leafy greens, and you can stop at a single glass of beer – on occasion – I say enjoy it!

It’s nice to know that your favorite brew is helping to protect your brain from illness.