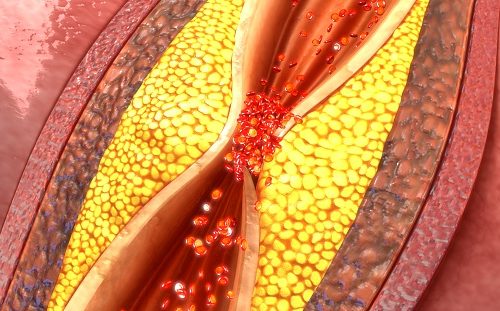 Atheroma refers to small fatty lumps that develop inside blood vessels (arteries). These form as patchy areas of plaque and contribute to the hardening of arteries, a condition known as atherosclerosis.

Atheromas do not develop overnight but instead take months or years to accumulate, becoming larger and thicker. Over time, a patch of atheroma can make an artery narrower, restricting and reducing blood flow through the vessel.

A danger that atheromas exhibit is their tendency to develop tiny cracks or rupture. When this occurs, it can trigger the circulatory system to produce a blood clot (thrombosis) at the site of the atheroma. This can lead to a complete blockage of blood flow at the affected site, potentially causing a heart attack.

What are the causes and symptoms of atheroma?

Atheromas are composed of mostly macrophage cells (a type of white blood cell) or debris, containing lipids (fats), calcium, and a variable amount of connective tissue. When these materials accumulate, they lead to the narrowing of the artery they are attached to. Atheromas do not occur in veins, the blood vessels responsible for delivering de-oxygenated blood back to the heart, as they are not subjected to the same hemodynamic pressure that the arteries are.

Arteries are composed of multiple layers of tissue, and atheromas can accumulate in the tunica intima layer that is between the endothelium lining and the smooth-muscle middle layer of the artery wall.

However, the exact origins of atheromatous plaque are not well understood. These fatty streaks can be found in the artery walls of infants but are usually absorbed. But in certain cases, incomplete absorption may contribute to atheromatous plaque later in life.

Signs and symptoms of atheromas include:

Atheromatous plaque causes partial or complete obstruction of an artery. In the majority of cases, a clot formation is responsible for complete blockage. Commonly, the extent of ischemic damage depends on the size of the artery involved and whether collateral circulation is present to help bypass the blocked artery. Often the arteries of the heart, abdomen, and pelvis are affected by atheromatous plaque. Effects of atheromas include:

Atheromas and the narrowing or complete blockage of arteries can lead to several complications. When the fibrous cap covering plaque breaks down, platelets involved in blood clot formation become activated. When enough platelets reach the site of the plaque, a blood clot forms, causing ischemia and infarction.

Additionally, if atheromatous plaque becomes calcified, it makes the artery brittle, rigid, and unresponsive to increases in blood pressure. This can result in a ruptured artery, leading to a hemorrhage or excessive bleeding. Another potential complication can occur due to weakened arterial walls caused by plaque that has developed between layers of blood vessel tissue. This may lead to an aneurysm, which is an enlargement of part of the artery, and there is a chance the artery could rupture.

Additional complications of atheromatous plaque include:

Several factors that contribute to atheromatous plaque formation can be effectively thwarted. They are referred to as modifiable risk factors.