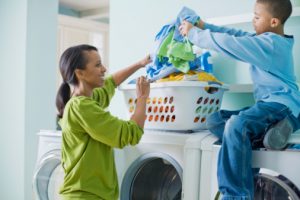 If you have breathing problems or asthma, some household cleaning products can really bother you and irritate your breathing passages. But there’s hope. New products to help clean the homes of allergy sufferers could one day make their way to the market, thanks to two patents awarded to a research team at the University of South Carolina for their CO2-based fabric cleaning invention. In fact, CO2 is now being used at dry cleaners as an eco-friendly and safe alternative to traditional cleaning.

This is good news for the nearly seven million children in the United States with asthma. They make up more than nine percent of the country’s entire child population, according to the Centers for Disease Control and Prevention (CDC), and their numbers are growing. The CDC says that the reasons for the rise in asthma rates is unknown, but we do know that asthma attacks can be prevented by taking prescribed medication and avoiding triggers.

Asthma is a chronic condition in which certain triggers (like cigarette smoke, air pollution, or stress) can cause the airways of the lungs to become inflamed and swollen, according to the Canadian Lung Association. In turn, the airways narrow, making it harder to get air in and out of your lungs. The muscles around your lungs and airways spasm, further narrowing the passages.

Allergens are common asthma triggers. For people allergic to substances like pet dander, breathing the allergen into the lungs can lead to an asthma attack. Other substances, like cigarette smoke, irritate the lungs and trigger asthma because they can cause muscle spasms around the airways. Indoor air pollution like dust and mites can affect asthma as well, and children who grow up in homes with indoor pollution are more likely to develop the condition.

According to the University of South Carolina (USC) release, “Methods and Compositions for Eliminating Allergens and Allergen-Producing Organisms,” the patents use carbon dioxide to freeze-clean home fabrics like those used in carpet, mattresses, and furniture. CO2 is sprayed onto the fabrics directly. Its vapor allows for tiny pellets of dry ice to form. The fabric is then vacuumed, removing both the dry ice and the allergens attached. Smart!

The process can deactivate proteins in pet dander and remove smoke residue, thus neutralizing threats to the lungs in asthmatics. The CDC says about half of people with asthma will have a serious attack each year, so the benefit to public health is significant.

Tests done at the USC showed that the process didn’t damage the fabrics and a single cleaning lasted for up to half a year.

The process of developing the patents initially began as an investigation of effective means of medical sterilization.
“However, we realized that there was a critical need to address the removal of asthma triggers from the home,” said chemical engineering professor Manton Matthews. “These triggers, which are actually proteins produced by pets and pests, can be removed with our technology.”

This new technology is a great example of research and development with real-world applications that will be wonderfully safe and effective for people with allergies and asthma.

Having a clean home is important, especially if you or someone you love has asthma. Therefore, here are some home-cleaning tips for asthma that you can utilize in order to prevent asthma attacks and promote clear breathing.
Be wary of bringing home pets as their dander can be an asthma trigger and they can also bring in other triggers from the outdoors.

Keep your house as decluttered as possible.

Use an air purifier or mechanical air cleaner.

Don’t use a humidifier as it can worsen mold and dust.

Be mindful of cleaning products as some contain harsh ingredients that can trigger asthma.

Allergy-proof your home as best as you can – dust, refrain from keeping windows open during pollen season, use hypoallergenic bedding.

By following these tips. you can have greater success in avoiding asthma attacks in your own home.

A new study has found that women’s risk of asthma increases with obesity. Almost nine percent of Americans have asthma. Normal-weight individuals have a seven percent incidence of asthma, compared to eight percent rates among those who are overweight. Among obese Americans, 11 percent were found to have asthma. Continue reading…

In teens, stress and anxiety have been found to trigger asthma symptoms, such as awakening throughout the night with shortness of breath. The small study consisted of 38 asthmatic teenagers whose stress and anxiety scores were found to be higher than the general population. Continue reading…