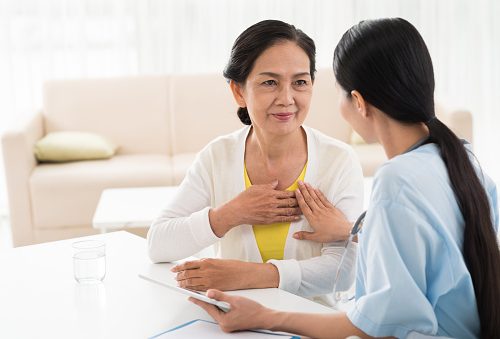 Breast cancer is one of the most common cancers in women today. It is estimated that about 12 percent of U.S. women will develop breast cancer within their lives. Many organizations have made great strides in promoting breast cancer awareness, yet a recent study finds that Asian women are less likely to get a follow-up mammogram after they receive an abnormal result.

Mammograms are one of the most important tools for breast cancer diagnosis. They allow doctors to screen for the disease, diagnose, and follow those who have breast cancer. Essentially, a mammogram is an X-ray photograph, making it safe and reasonably accurate.

Current recommendations for women at average risk for breast cancer is to get a mammogram every year beginning at age 40. This allows for early intervention if need be.

However, a new report on women in the San Francisco area has left doctors scratching their heads. As mentioned, Asian women are not seeking additional breast cancer screening despite getting suspicious results.

“Rather than being a monolithic group, Asians are, in fact, very diverse in nationalities, language, immigration history, education, and economic background. Recognizing differences among Asians may help clinicians develop better rapport and communication with their Asian patients, which can improve adherence to screening recommendations,” said Kim Hanh Nguyen, one of the researchers of the study.

Nguyen goes on to say that this finding may be a result of many population-based breast cancer studies not including Asians.

The study involved compiling data from the San Francisco Mammography Registry, which contained information on nearly 51,000 women who had received abnormal breast imaging results between 2000 and 2010.

The study found that Vietnamese and Filipina women waited the longest until getting a follow-up imaging test compared to white women.

To put this into context, about 57 percent of Asian women were receiving follow-up tests 30 days after receiving an abnormal mammography result, compared to 77 percent of white women. Similar numbers were seen at 60 and 90 days among all Asians besides Japanese women.

“The reasons for these long delays may be due to linguistic, cultural and other barriers that affect patient-provider communication for disadvantaged Asian groups. More research attention is needed to understand the specific reasons for these differences,” Said Nguyen.

Every woman should do this for better health

A woman’s sense of smell may impact her social status