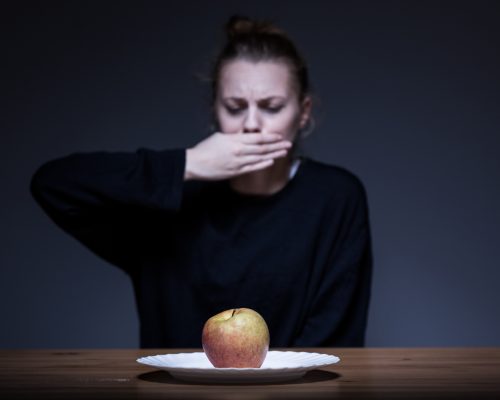 Anorexia nervosa and bulimia nervosa, two eating disorders, may be caused by altered function of neural circuitry. Both eating disorders are known to be deadly and are characterized by extreme behavior of restricting food intake, or binging and purging.

Research lead Walter H. Kaye said, “It has been unknown whether individuals with anorexia or bulimia have a disturbance in the system that regulates appetite in the brain, or whether eating behavior is driven by other phenomena, such as an obsessional preoccupation with body image. However, this study confirms earlier studies by our group and others that establish a clear link between these disorders and neural processes in the insula, an area of the brain where taste is sensed and integrated with reward to help determine whether an individual hungry or full.”

First author Tyson Oberndorfer said, “One possibility is that restricted eating and weight loss occurs in anorexia, because the brain fails to accurately recognize hunger signals. Alternately, overeating in bulimia could represent an exaggerated perception of hunger signals.”
A previous study, which also looked at brain structure in both eating disorders, came up with similar findings and suggested the insula plays a crucial role in eating disorders.

Kaye added, “It may be possible to modulate the experience by, for example, enhancing insula activity in individuals with anorexia, or dampening the exaggerated or unstable response to food in those with bulimia.” Others studies have indicated that healthy individuals can use functional MRI, biofeedback, or mindfulness in order to control the brain’s response to food stimuli.

In anorexia, patients have an overactive satiety signals, and so researchers suggest that consuming bland food may help prevent such overstimulation from occurring.

It’s important that family and friends of the patient are supportive and loving. The patient must feel loved, safe, secure, not judged, and comfortable. Otherwise, they may regress and become far worse. Family-based treatment is also an important part of curing process, as it’s not solely about the patients themselves, but the family must also work as a whole for recovery. Parents become part of the recovery process and work to help their child.

Cognitive behavioral therapy is a form of therapy, which helps the patient to cope with life’s struggles and to change their reaction and behavior towards what is going on in their life. A patient may confront their fears and anxieties, and work with a therapist to move beyond them.

Other treatment methods include narrative therapy, which views eating disorders as external figures and not part of the person, and medication like antidepressants.

Your doctor will help you choose the appropriate mode of treatment which can best help you to recover.

Bulimia nervosa, an eating disorder increases the risk of type 2 diabetes. Bulimia nervosa is when a person binges and purges food. This means, they will consume large amounts of food only to expel it from their body immediately afterwards. This can be done through vomiting or with the use of laxatives. Causes of bulimia nervosa can range from psychological, biological, social, and cultural influences. Continue reading…