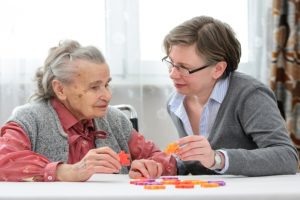 A new approach to amnestic mild cognitive impairment (aMCI) therapy may help improve memory and modify disease progression. Senior study author Dr. Michela Gallagher explained, “In the case of early aMCI, it has been suggested that the increased hippocampal activation may serve a beneficial function by recruiting additional neural resources to compensate for those that are lost. However, animal studies have raised the alternative view that this excess activation may be contributing to memory impairment.”

Dr. Gallagher concluded, “Apart from a direct role in memory impairment, there is concern that elevated activity in vulnerable neural networks could be causing additional damage and, possibly, widespread disease-related degeneration that underlies cognitive decline and the conversion to Alzheimer’s disease. Therefore, reducing the elevated activity in the hippocampus may help to restore memory and protect the brain.”

Amnestic mild cognitive impairment may double the risk of death

Previous research has found that amnestic mild cognitive impairment doubles the risk of death. The researchers looked at 733 older adults who were all evaluated at baseline for cognitive ability. They were also tested for the APOE-4 gene variant which is a known factor to increase the risk of Alzheimer’s disease.

Currently, amnestic mild cognitive impairment cannot be reversed or cured, but rather it can be slowed down. A common form of treatment for aMCI is to prescribe common Alzheimer’s drugs, but numerous clinical trials have not shown much benefit from this practice.

Adopting a healthy lifestyle could be beneficial for someone living with aMCI in order to better manage symptoms. Smoking should be stopped and alcohol consumption should be minimized as both can have negative effects on the brain. Exercise, too, has been shown to protect the brain against dementia, along with a healthy diet.

Managing other medical conditions can also be beneficial in managing aMCI, like reducing blood pressure and cholesterol or managing diabetes.
Other tips to help manage aMCI in the elderly:

By following these tips and working closely with your doctor, you can have better success in managing aMCI and slowing your risk of dementia.