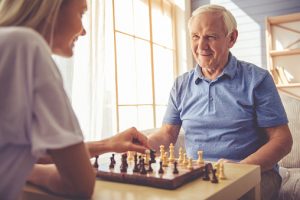 Alzheimer’s disease can be predicted even in people with intact memories if disruptions are observed in their circadian rhythm. Circadian rhythm refers to our internal body clock, which controls our sleep/wake cycle. Changes in this rhythm cannot be detected in brain scans and need not affect a person’s memory. However, a research paper published in JAMA Neurology claims that any changes in a person’s sleep/wake cycle suggest that the person is at risk of developing Alzheimer’s disease in the future.

The published research was based on studies carried out by a team of scientists at Washington University School of Medicine in St. Louis.

What is circadian rhythm and how is it linked with Alzheimer’s disease?

Circadian rhythm is our 24-hour clock that dictates when we sleep and wake up. The duration of our sleep and waking hours varies based on our levels of amyloid—a type of protein in our body. These levels predictably fluctuate throughout the day and are lower when we sleep.

When amyloid levels increase, sleep is disturbed and people experience insufficient sleep. The study that led to this discovery was led by Geraldine J. Kress and Erik S. Musiek, both assistant professors of neurology. They attempted to control the circadian rhythms of mice by manipulating genes that controlled their internal body clocks.

The study revealed how circadian disruptions had a correlation with the development of amyloid deposits in the brain. Since such deposits are observed in patients suffering from Alzheimer’s disease, scientists drew a correlation between the two.

The participants had no symptoms of Alzheimer’s disease, but did not sleep properly. Musiek described their sleep as “fragmented.” Although none of the participants were sleep deprived, Muziek explained, “Sleeping for eight hours at night is very different from getting eight hours of sleep in one-hour increments during daytime naps.”

In addition, participants had to wear devices to track their activity for one to two weeks and maintain a sleep diary. This helped researchers identify the frequency of periods of rest and activity throughout the day and night.


Findings of the study

Amyloid protein was not detected in 139 participants. However, many of these participants had normal sleep/wake cycles although they had disruptions in their circadian rhythm. These were related to age, sleep apnea, and other causes.

However, the brain scans and cerebrospinal fluid in the remaining 50 participants showed abnormal results. All these participants had considerable disturbances in their internal body clocks. Researchers ruled out sleep apnea and age as factors responsible for this disturbance.

Scientists also found that participants who had brief periods of activity and rest during the day had a greater likelihood of developing amyloid plaque in the brain. This shows that the onset of Alzheimer’s can be predicted before memory loss is noticed in a person if he or she experiences disruptive changes in their sleep-wake cycles.

Also read: Is anxiety an early sign of Alzheimer’s disease?

Education may be the best defense against Alzheimer’s disease