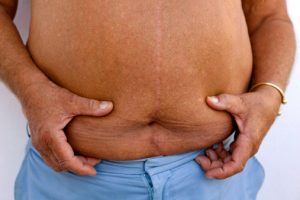 Let’s face it, body fat has a bad reputation – something we fret about constantly and try to burn away with regular exercise. Well, here’s something to consider as you try to keep your New Year’s resolution of losing weight: When it comes to age-related obesity, brown fat is simply failing us.

New research, conducted by Japan’s University of Shizuoka and published by the  Journal of the Federation of American Societies for Experimental Biology (FASEB) in January, reveals that the thermogenic activity of brown fat is reduced significantly as we get older. Thermogenesis is the natural process by which the body produces heat. Typically, brown fat – located in the backs of our necks – helps to burn the “bad” white fat situated around our bellies.

In other words, we have to work that much harder to keep our weight in check as we age, protecting ourselves from obesity-related health issues.

RELATED READING: How Regular Sleep Is Linked To Weight Loss

“Future studies on . . . animals and humans may reveal new therapeutic targets to treat metabolic disorders associated with obesity,” Junko Sugatani, a researcher in the university’s School of Pharmaceutical Sciences, told the FASEB Journal. Metabolism is the process your body uses to get or make energy from the food you eat. When abnormal chemical reactions in your body disrupt this, a metabolic disorder, such as diabetes, results.

During their study, scientists looked at two groups of mice: One that had the platelet-activating factor receptors (PAFR) gene – which is implicated in pathologic processes like allergies and asthma – knocked out, and another that was considered normal. They found that compared to their wild-type littermates, PAFR-deficient mice developed a more severe obese state – characterized by higher body fat mass – over time.

Researchers are only beginning to understand fat and the many functions it has in the human body. For one thing, it stores excess calories safely for use whenever you are hungry. Fat also releases hormones controlling your metabolism. In fact, brown fat, particularly, now is considered to be more like muscle than white fat, which it burns effectively whenever activated.

Also, scientists now know that lean people tend to have more brown fat than overweight or obese people. Likewise, children have more brown fat than adults. It’s what keeps them fit and warm, especially during the winter months. Conversely, older people often complain that they must exercise twice as hard in order to achieve half of the results of their younger counterparts.

Ultimately, the University of Shizuoka’s findings could help to explain the molecular mechanism behind the PAF/PAF receptor-mediated anti-obesity. They could even lead to the creation of new targets for the treatment of obesity and related disorders, including diabetes, high blood pressure, heart disease, cancer, infertility and ulcers.

But even if obesity treatment meant to increase a person’s brown fat or stimulate existing brown fat is developed, scientists warn that it won’t be a panacea for weight issues. What it may do, though, is help people to lose fat with a sound diet and exercise regimen. In the meantime, be prepared to eat that much more lean proteins and salads, and run much longer on the treadmill.