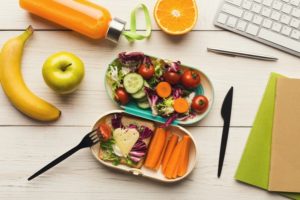 As we begin to reach middle age, certain parts of our health become concerns that were not on our radar previously. This is often a time where people choose to go on diets in order to improve heart health and lower cholesterol. The problem for most of us is sticking to the diet.

There always seems to be some reason to excuse unhealthy eating in the short term: the holiday season, a vacation, birthdays, or other special occasions. The problem gets more significant when the unhealthy eating continues on past the short term and becomes a long-term issue. Failing at a diet does not have to be the end of your health journey, however, even if it may feel like an impossible hurdle to overcome.

In fact, new research says that if you fail at a diet once, twice, or a hundred times, the most important thing is to keep trying and not give up on eating healthy altogether. Within a short time frame of returning to healthy eating, cardiovascular risk factors and cholesterol can be lowered. The study recruited participants and directed them to follow one of two kinds of diets. The first is called a DASH eating style (Dietary Approaches to Stop Hypertension) and the second was a form of the Mediterranean diet.

“Our DASH-style eating pattern focused on controlling sodium intake, while our Mediterranean-style focused on increasing healthy fats,” said Lauren O’Connor, the lead author of the paper. “Both eating patterns were rich in fruits, vegetables and whole grains.”

The participants were instructed to maintain their assigned diet for a period of five to six weeks, at which time the researchers measured their risk factors for cardiovascular disease. The researchers then told the participants to return to their regular eating habits for a period of four weeks, after which their risk factors were measured again. Finally, for another five to six weeks, the participants were asked to return to the diet they were initially assigned to. What this resulted in was essentially a cardiovascular yo-yo.

“If you’re inconsistent about what kinds of foods you eat, your risk factors for developing these diseases are going to fluctuate,” said Wayne Campbell, one of the researchers behind the study. “Even in the short term, your food choices influence whether you’re going to have a successful or unsuccessful visit with your doctor.”

Within a month of adopting the diets, participants showed significantly lowered cholesterol and other risk factors for cardiovascular disease. When they returned to unhealthy eating habits, however, the risk factors increased once again, only to drop back down during the final six-week period of healthy eating.

“These findings should encourage people to try again if they fail at their first attempt to adopt a healthy eating pattern,” Campbell said. “It seems that your body isn’t going to become resistant to the health-promoting effects of this diet pattern just because you tried it and weren’t successful the first time. The best option is to keep the healthy pattern going, but if you slip up, try again.”