Home » Weight Management » Diets » Does quinoa have gluten? Is it safe for celiac disease patients? 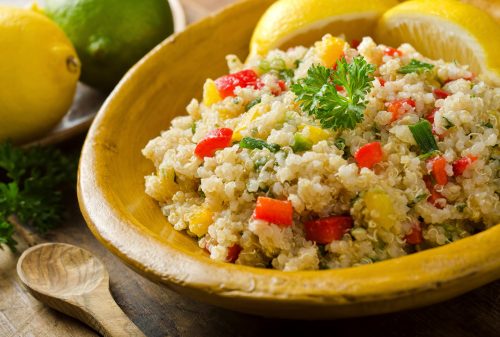 Including quinoa in the gluten-free diet does not exacerbate celiac disease. Quinoa has been generally recommended as a healthy grain for celiac patients because it does not contain gluten, but in-vitro data has shown that quinoa storage proteins may stimulate innate and adaptive immune responses in celiac patients.

Quinoa is technically a seed and not a grain, which is the common type of food gluten is found in. However, it has been found that quinoa may have “gluten-like” storage proteins that may mimic the same type of proteins found in wheat, barley, and rye; the most common products containing gluten. It is important to always look for the “gluten-free” label when purchasing quinoa products as it may cause symptoms in gluten sensitive individuals.

Researchers at the Department of Gastroenterology, King’s College London, U.K., aimed to evaluate the in-vivo effects of quinoa intake in adult celiac patients. The results have shown quinoa is well tolerated and safe to consume for those suffering from gluten sensitivity.

The study tracked 19 celiac patients who consumed 50 grams of quinoa a day for six weeks. Researchers evaluated diet, serology, and gastrointestinal parameters, as well as detailed histological assessments of ten of the patients before and after quinoa consumption. Full blood count, along with liver and renal profile were used to monitor their health status. Iron, vitamin B12, serum folate, and lipid profile were also used to determine any effects of quinoa on the gluten-free diet in these celiac patients.

A previous study set to explore whether quinoa would cause an immune response in celiac patients. The researchers studied 15 different types of quinoa, with four of them containing quantifiable amounts of gluten. Those amounts were still below 20ppm, the safe gluten threshold for celiac patients. Two types of quinoa were found to have higher amounts of gluten – enough to trigger an immune response.

The researchers concluded that overall quinoa is safe for celiac disease patients to consume. Most of available quinoa varieties will not trigger an immune response.

Researchers Dr. Victor F. Zevallos explained, “We observed large variability in the immune responses to quinoa prolamins depending on the cultivar tested. This is in agreement with similar studies evaluating the safety of other plants such as oats. We anticipate that quinoa is a safe alternative for celiac patients. However, without in vivo data (i.e. animal testing and clinical trials), it is difficult to accurately estimate the effects of quinoa consumption in celiac patients, particularly in those patients that are sensitive to small quantities of gliadin-like toxic peptides. Therefore, further clinical studies are necessary to confirm the suitability of quinoa for celiac patients and to facilitate its full incorporation in the gluten-free market.”

Quinoa is a grain high in protein and naturally gluten free, which makes it a great option for a celiac-friendly diet. A healthy food option for basically everyone, quinoa also provides healthy fats and essential minerals. The best part is, quinoa is super easy to cook and can be paired with just about anything.

For a high-protein breakfast cereal, cook half a cup of quinoa in one cup of water until creamy. Quinoa flakes can be added to any pancake recipe for extra protein and nutrition value. Quinoa can be a substitute for rice or pasta…. As you can see, there are many culinary applications of quinoa that can diversify and enrich your gluten-free diet.

Make sure your quinoa is gluten-free

It is always a good idea to look at the ingredients before you consume any type of food. This is especially important for those suffering from gluten sensitivity or celiac disease. Make sure no gluten-containing products have been added to your food and be mindful of “gluten-free” labels, which can assure that your product is gluten-free. Products that do not specify if they are gluten-free may have been contaminated by other gluten-containing products during the manufacturing and packing stages of your food.

It is important to recognize that not everything made with quinoa is gluten-free, but many quinoa-based products currently on the market are, and will clearly say as much. Speaking with your doctor or licensed dietitian will help provide more knowledge on gluten-sensitivity to help you make the best choices.

Celiac disease and Crohn’s disease both cause inflammation of the intestines, and although there are some overlapping symptoms each condition has its own unique disease course that requires a very specific form of treatment. Continue reading…