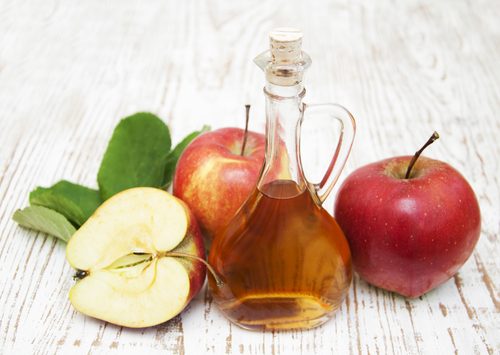 Unlike white vinegar, apple cider vinegar has a yellowish-brown color. Known as “mother of vinegar,” it consists mainly of acetic acid bacteria. During its fermentation process, sugar in the apple cider is broken down by bacteria, and yeast is turned into alcohol before it’s all broken down into vinegar. It’s often sold unfiltered and unpasteurized in health food stores and some supermarkets, so you want to look for the organic kind.

To date, few studies have tested the health effects of apple cider vinegar. But some preliminary research suggests that drinking it straight or simply using it in your homemade salad dressings and other mixes can help in these four ways, in particular.

As a general guide, try taking one to two teaspoons a day – some drink it diluted in a cup of water. Rinsing your mouth after consuming it is recommended because its acidity can erode tooth enamel.

RELATED READING: Eating more of this will help prevent diabetes


Four reasons why apple cider vinegar is good for you

Here’s one home remedy for dandruff. First, mix 1/4 cup apple cider vinegar with 1/4 cup water. The vinegar mixture is typically poured into a spray bottle and spritzed on the hair and scalp – not the eye and ear area! Wrap a towel around your head and leave on 15 minutes to an hour.

This vinegar solution helps to restore the pH balance of the scalp and discourage the overgrowth of malassezia furfur, the yeast-like fungus that is thought to bring on dandruff. Try this once or twice every week.

Researchers attributed the lowering to a reduction in renin activity – renin is an enzyme released by the kidney to help control the body’s sodium-potassium balance, fluid volume and blood pressure.

There isn’t a great deal of scientific support for the claim that apple cider vinegar promotes weight loss. But a study published in Bioscience, Biotechnology, and Biochemistry in 2009 looked at obese people who consumed acetic acid every day for 12 weeks. They all showed significant decreases in body weight, abdominal fat, waist circumference and triglycerides.

In another 2009 study published in the Journal of Agricultural and Food Chemistry, researchers showed that acetic acid may help prevent the buildup of body fat and certain liver fats.

Although it requires more study, there’s evidence that apple cider vinegar can be healthy for diabetics. That’s because it may lower blood sugar levels. Still, vinegar has chromium in it, and this can adversely affect insulin levels.

Sure, apple cider vinegar may not look and taste like much. After all, vinegar is vinegar, right? But clearly, the health benefits can be notable. Even Hippocrates is said to have used it as a health tonic back in his day. American soldiers are said to have used it to fight indigestion, pneumonia and scurvy.

Just remember: Excessive doses of apple cider vinegar have been found to damage the stomach, duodenum and liver in animals. So if you’re considering using apple cider vinegar for a specific health issue, it’s important to consult your family doctor beforehand.

The simple beverage swap to reduce risk of diabetes