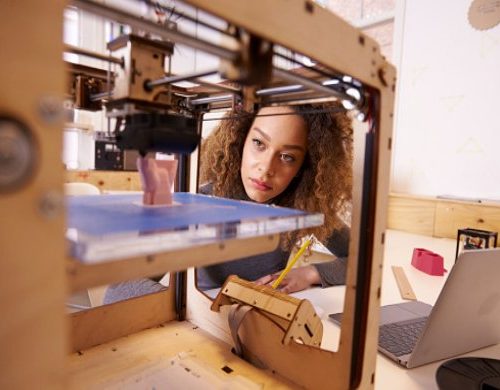 Hearing loss is a prevalent problem in the world today. Nearly two percent of adults aged 45 to 54 have disabling hearing loss. This rate increases to 8.5 percent in adults aged 55 to 64 and about 25 percent of those aged 65 to 74.

Many of these patients suffer from conductive hearing loss, which can be treated through surgical reconstruction via prosthesis. However, custom tailoring a prosthesis for each patient, using stainless steel struts and ceramic cups, has been plagued with high failure rates because most prostatic implants are incorrectly sized.

This may all be a thing of the past as researchers have begun testing CT scan and 3D printing to create accurate, custom designed prosthetic replacement for damaged structures of the middle ear.

3D printing is a relatively new technology and is making waves in the medical industry. The concept of printing a document is a relatively common practice as most everyone has printed out a picture or a coupon at some point. But imagine you can print out real, physical, 3D objects. This is exactly what 3D printers achieve.

“The ossicles are very small structures, and one reason the surgery has a high failure rate is thought to be due to incorrect sizing of the prostheses. If you could custom-design a prosthesis with a more exact fit, then the procedure should have a higher rate of success,” said study author Jeffrey D. Hirsch, M.D., assistant professor of radiology at the University of Maryland School of Medicine (UMSOM) in Baltimore.

The researchers used 3D printing to successfully create the bones of the ear they obtain from human cadavers. They then created a detailed image using computer tomography (CT) scanning. Using an inexpensive 3D printer, unique prostheses were made restoring continuity for each middle ear in the cadaver experiment.

The benefit of creating these prosthetic structures not only provides a near perfect match of tiny ear structures, but it was also easy for surgeons to correctly replace the prosthesis with the correct source they originated from.

The use of the CT scanner detected minute differences in ossicle structure, which can then be accurately represented using 3D printing. This decreases surgical time and ensures a proper fit.

“Instead of making the middle ear prosthesis solid, you could perforate it to be a lattice that allows stem cells to grow onto it. The stem cells would mature into bone and become a permanent fix for patients with hearing loss,” Dr. Hirsch said.

Also Read: Everyday noises that are causing your hearing loss