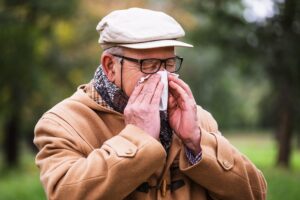 “Bundle up, or you’ll get sick!” How many times have you heard that one?

I’ve been hearing it since I was a kid, and for a couple of decades, I’d say “not true” when I did. Well, I may have been wrong.

It doesn’t take a brilliant mind to recognize that viral infections like colds, the flu, and even COVID-19 transmit fiercely in the colder months. Although many have blamed the temperature, science often attributed the phenomenon to people spending more time in close quarters, which allowed viruses to spread more easily.

Now new research suggests that the temperature may be to blame.

It’s possible that a previously unidentified immune response inside the nose is responsible for fighting off viruses that cause upper respiratory infections. Cod weather may inhibit the protective response, thereby making it more likely to contract infections.

The nose is a primary entry point for bacteria and viruses, which can either be inhaled or directly deposited if you rub your nose. Once inside, they work their way up the airway and into the body, infecting cells along the way.
Your nose, however, is capable of fighting infection – if the temperature is right. The immune system goes to work as cells at the front of the nose detect inhaled germs and respond by releasing billions of tiny fluid-filled sacs into mucus (called EVs) to surround and attack the invader, blocking it from advancing and infecting.

Researchers in Boson took samples from the noses of patients and volunteers and exposed them to three viruses. Each virus triggered the immune response. However, the ability to respond was affected by temperature.

When healthy volunteers were placed in cold conditions – about 40 degrees Fahrenheit (about 4.5 degrees Celsius) – the temperature inside their noses dropped, and so did the amount of immune-promoting mucus it expelled.

The cold temperatures cut the amount of EVs by 42 percent, while antiviral receptors were also less responsive in the colder temperatures.

So, there you have it – there may be some truth in the idea that cold temperatures can boost the risk for cold, flu, and other upper respiratory illness.

That doesn’t mean you should stop washing hands regularly or taking other precautions to prevent illness; just that temperature may present another risk factor.