Home » Health News » Your job is making you obese: Study 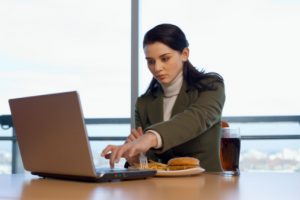 New research published in Social Science and Medicine reveals that your job could have negative impacts on your waistline and even be making you obese. The findings come from researchers at the University of Adelaide, Central Queensland University and the University of South Australia. The researchers uncovered that a lower body mass index (BMI) is associated with a worker’s freedom to use their skills in their workplace and a higher BMI is associated with jobs that entail making plenty of decisions.

Due to the differences in job control and occupation, the researchers felt it was best to study the two factors separately. Job control was broken down into two forms: skill discretion – having and using skills – and decision authority.

In 2014, 1.9 billion adults worldwide were overweight and 600 million were considered obese. Researchers were intrigued about how work and work experience contributes to obesity.

Christopher Bean from the University of Adelaide said, “Many people point to ‘eating too much and not moving enough’ as the cause of obesity. While this might explain how weight gain often happens, it does not acknowledge things such as environmental, psychological, social or cultural factors – these are some of the important why reasons that obesity happens.”

The researchers examined data from 450 mainly middle-aged participants who worked in a variety of occupations. Height, weight, and waist circumference were all measured, and telephone interviews were conducted to collect information about the participants’ work.

High demand jobs are typically seen as stressful and high control jobs have been found to negate the effects of high demand. Both factors are typically examined together, but when researchers separated them and accounted for gender, age, income, work hours and job nature, they found both factors were associated with changes in weight; however, those changes were opposing – high demand caused weight gain, while high control caused weight loss or healthy weight maintenance.

Bean concluded, “When looking at the wide system of factors that cause and maintain obesity, work stress is just a small part of a very large and tangled network of interactive factors. On the other hand, work is a fundamental part of life for many, so it is important to find innovative ways of extending our understanding of how factors at work may be implicated in the development and maintenance of obesity. It is important to challenge the status quo and explore unexpected or counter-intuitive findings with curiosity.”