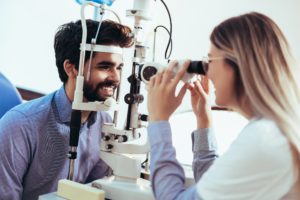 New research shows how your eyes could be the window into seeing your risk for Alzheimer’s disease. Since Alzheimer’s disease begins to alter and damage the brain many years before symptoms appear, early detection is often extremely difficult.

Alzheimer’s disease is the most common cause of dementia. It causes a continuous decline in thinking, behavioral, and social skills that disrupts a person’s ability to function independently. For many patients, early detection of Alzheimer’s meant being diagnosed when symptoms started to appear. But a new study now shows how it could be diagnosed even before any signs or symptoms of the disease.

In a new study published in Neurology of Aging, researchers at the University of California San Diego School of Medicine say that a person’s eyes may be the key in detecting Alzheimer’s disease. Their study showed how measuring how quickly a person’s pupil dilates while they are taking cognitive tests may be a low-cost, low-invasive method to help screen patients with an increased genetic risk for Alzheimer’s disease.

This new research focused on pupillary responses that are driven by the locus coeruleus, which are a cluster of neurons in the brainstem that are involved in regulating arousal and modulating cognitive function. The study was led by first author William S. Kremen, Ph.D., and senior author Carol E. Franz, Ph.D., both professors of psychiatry and co-directors of the Center for Behavior Genetics of Aging at UC San Diego School of Medicine.

In previous testing, researchers have primarily directed their attention to the accumulation of protein plaques in the brain called amyloid-beta along with tangles of a protein called tau. Tau is the earliest occurring known biomarker for Alzheimer’s disease, which first appears in the locus coeruleus, and it is more strongly associated with cognition than amyloid-beta.

The locus coeruleus drives pupillary response or the changing of the diameter of the eyes’ pupils during cognitive testing. Generally, the pupils will get more significant the more difficult the brain task. In previous studies, it was shown that adults with mild cognitive dysfunction displayed a greater pupil dilation compared to cognitively normal individuals. In this latest research, it was found that pupillary dilation responses correlate with identified Alzheimer’s disease risk genes.

“Given the evidence linking pupillary responses, LC and tau and the association between pupillary response and AD polygenic risk scores (an aggregate accounting of factors to determine an individual’s inherited AD risk), these results are proof-of-concept that measuring pupillary response during cognitive tasks could be another screening tool to detect Alzheimer’s before symptom appear,” said Kremen.

The early signs of the disease may be forgetting recent events or conversations. But often, by the time these warning signs are showing, it is past the point of early detection. This is why testing such as this eye test could offer new hope for those looking for the earliest detection of Alzheimer’s disease.