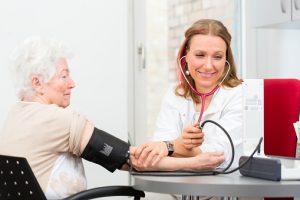 A government report revealed that many Americans with high blood pressure are not properly managing it, thus increasing their risk of experiencing heart attack, heart disease and stroke. The report showed that nearly 47 percent of Americans with high blood pressure have not been able to bring their numbers down to a healthy range, either through lifestyle changes or with medications. The new information comes from the Centers for Disease Control and Prevention (CDC).

Dr. Patrick O’Gara from the Carl J. and Ruth Shapiro Cardiovascular Center at Brigham and Women’s Hospital in Boston said, “I don’t think we have enough positive information to be cheering. Although the trend is positive, the magnitude of the problem is self-evident. We have a lot of work to do.”

Unfortunately, not all tactics to combat high blood pressure are effective for everyone. One major problem is getting people on the medications they need to manage their blood pressure, and then having them adhere to it.  Dr. Richard Stein, director of the Urban Community Cardiology Program at the New York University School of Medicine, explained, “Patients don’t like to take drugs. I don’t like to take drugs. Drugs that don’t have an obvious beneficial effect for me, it’s easier for me to forget to take them.”

The challenge is due to the fact that high blood pressure can be symptomless until it’s too late and the person experiences a cardiovascular event. Dr. Stein explained that it’s much harder to get someone to take medications when they feel fine.

Dr. O’Gara explained, “If I had 10 pharmacists who worked with me, I could reach 100 people more effectively. Primary care is shifting to where people go to buy their toiletries and toothpaste, out there in the community for these patients with chronic illnesses. It’s not coming to an academic medical center to have me take their blood pressure.”

“I think it may take a generational change, to alter our proclivity to overeat and use too much salt, to not exercise and spend too much time in front of a screen,” he concluded.