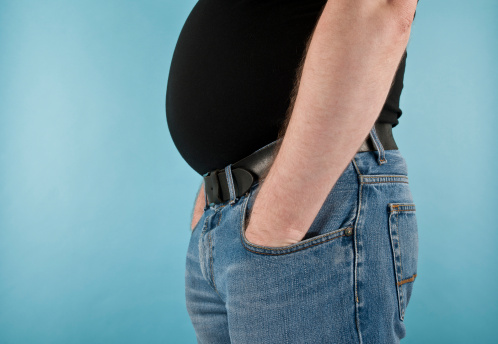 Obesity is a significant issue in today’s society, with approximately 35 percent of the global population being overweight and 11 percent being obese, according to the World Health Organization (WHO).  The problem  has become so significant that obesity is now officially labeled as a disease. There are many health risks associated with excessive weight, with at least 2.8 million fatalities in adults around the world each year because of complications related to excess weight.  New research published in the Journal of the American College of Cardiology has found that the location of the excess fat that you’re carrying impacts your risk of two major diseases: heart disease and cancer.  Researchers discovered that individuals that had large amounts of abdominal fat had an increased risk of heart disease and cancer compared to individuals that had a similar body mass index (BMI), but that mainly carried fat in other areas of their body.

BMI and Location of Body Fat

BMI is a simple calculation that uses height and weight measurements to classify lean, average, overweight, and obese individuals. A BMI of 25 or greater is considered overweight, while a BMI of 30 or greater is categorized as obese. An increased BMI is a risk factor for many diseases, including cardiovascular disease (i.e. heart disease and stroke), diabetes, musculoskeletal diseases (i.e. osteoarthritis) and certain forms of cancer, according to the WHO.  Interestingly, it has been found that death rates and diseases differ among individuals that have similar BMI levels, and the researchers of the current study suggest that significant levels of abdominal fat may be the reason behind these differences.

Previous research has found that increased abdominal fat can be more hazardous than fat that is located elsewhere in the body.  The researchers of this study wanted to find a link between the location of body fat and specific risk factors for heart disease and cancer.  This was the first study that used CT scans to investigate a direct link between specifically located fat deposits and disease risk.

The current study included 3,086 participants from the Framingham Heart Study, half of which were women and half of which were men, and with an average age of 50.  The researchers looked at the ectopic fat (fat that isn’t supposed to be there) in the abdominal region, around the heart tissue, and around the aortic artery.  A CT scan was used to identify areas of fat build-up in each individual.  Patients were then followed and assessed for heart disease, cancer and death risk factors for up to seven years.  Over the follow-up period, 90 cardiovascular events, 141 cases of cancer, and 71 deaths occurred.  After clinical risk factors and general obesity were adjusted for, the researchers found that abdominal fat was associated with a higher risk of heart disease and cancer.  The results of this study will allow medical professionals to predict heart disease and cancer risk by evaluating abdominal fat measurements in their patients.  This will allow patients and doctors to develop a plan of action to help prevent a serious health concern from arising.

Controlling your weight in an effort to prevent heart disease and cancer should be a top priority, especially if you are overweight or obese.  This can be done by limiting your caloric intake of fats and sugars and increasing your intake of fruits, veggies, and lean sources of protein. Taking part in regular physical activity will also help to control your weight.  If you are worried about your risk of heart disease and cancer because of increased abdominal fat, consulting with a nutritionist or dietitian in combination with a personal trainer may be the best way to get you on track towards a healthy weight.