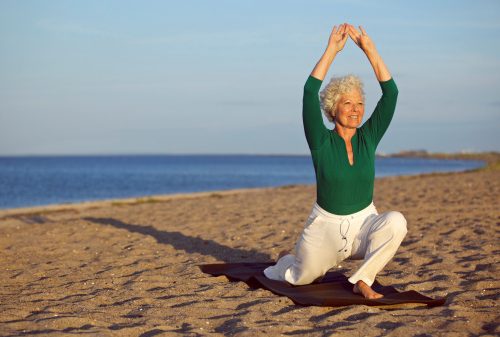 Yoga is an ancient practice involving a combination of physically challenging postures, said to improve both energy and mood, and is now becoming an activity of choice for many people dealing with the symptoms of arthritis.

Historical research suggests that Yoga was first developed in India over 5,000 years ago. Since then various styles of yoga and different combinations of yoga poses have emerged. There is acro-yoga, which blends the wisdom of yoga and the power of acrobatics, hip-hop yoga that you do with fast-paced music, Doga, which essentially means you use your dog as a prop to deepen your poses, and naked yoga, which some may consider fun but somewhat racy.

Of course, there is also traditional yoga, which simply focuses on basic physical and mental strength-building exercises by using postures techniques, breathing techniques, meditation and relaxation. No matter how you pose it, yoga exercises are gaining popularity around the world. Surveys show that 10 percent of Americans either currently participate in some form of yoga or have at least tried it. Why? A lot of people say it can be both serene and fun.

For years people have insisted that yoga poses improve their physical strength, their mood, as well as their energy level. Research seems to back up these claims. 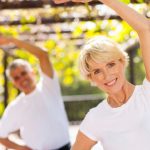 Studies as far back as 1975 suggest that yoga poses improve function in people who suffer from chronic low back pain, while other research has indicated practicing yoga has health benefits such as reducing heart rate and blood pressure. Now, the largest randomized trial so far to examine the impact of yoga on both the physical and psychological well being of people with arthritis, has concluded that yoga can improve symptoms of arthritis and improve arthritis sufferers’ moods.

The study, published in the Journal of Rheumatology, included 75 people with either knee osteoarthritis or rheumatoid arthritis. They were randomly assigned to either a wait list or to eight weeks of yoga classes that they were required to participate in twice a week. As well, they were instructed to practice yoga weekly at home. The arthritis sufferers were assessed for both physical and mental health before and after each session. The researchers had no idea which group the participants were assigned to – the yoga group or the wait list. Those taking part in yoga reported a 20 percent improvement in energy, mood and physical functioning. This included the ability to complete physical tasks at both home and work. Walking speed improved to some extent as well. These improvements were still evident nine months later.

Many medical professionals and their arthritis patients have been concerned about yoga because joints are so sensitive. For this reason, the authors of this study put safety first. The study was well controlled and involved highly experienced yoga instructors and therapists with extra training to adapt the poses to accommodate individual needs and abilities. None of the participants went off of their regular arthritis medication during the study.

After the study, the research team developed a checklist to make is easier and safer for doctors to recommend the practice of yoga to their arthritis patients.

Health benefits of yoga for people with arthritis

According to the American College of Rheumatology, physical activity is an important part of treating osteoarthritis and rheumatoid arthritis. Well over 75 scientific studies have been published in major medical journals explaining that yoga is a safe and effective form of physical activity and an exercise with great psychological benefits, such as improved mood. Only recently have the benefits to arthritis patients been made clearer. A handful of yoga and arthritis studies have shown promising results; indicating improvements in joint health, energy level and mental well-being.

Studies conducted at the University of Pennsylvania have shown that yoga can improve joint stiffness for people with arthritis, while researchers in California have reported improved sleep in arthritis patients who participate in yoga. Studies on yoga and arthritis in regards to balance have been mixed to date, but some early research suggests yoga poses may be able to improve flexibility. 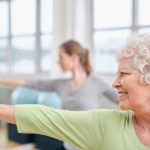 If you are considering yoga exercises to treat symptoms of arthritis it is best to discuss it with your doctor first. In the meantime, here is a run-down of some of the yoga poses that medical researchers and yoga therapists believe are best for people with arthritis.

Stand with the sides of your big toes touching. Your second toes should be parallel and your heels slightly apart. Lift and spread your toes, and place them back down on the floor.

Standing with both feet touching, you bring your hand together (palm-to-palm) and place them at your heart. Keeping your hands together (interlacing the fingers if necessary), exhale and raise your arms upward. Slowly bend backward (gently) while keeping your arms stretched above your head.

Drop down onto your knees, spread your knees wide and bring your big toes together. Sit your hips back onto your feet or heels and reach your arms forward onto the ground. If possible, rest your forehead on the mat.

Reverse the cow position. From all fours, pull your navel in and up to round out your spine, arching away from the ground. Try to reach your hips back toward your ankles. Moving gently from cow to cat pose is a good way to create flow in your back muscles.

There are many other poses that arthritis sufferers can benefit from. It is best to start with beginner poses, such as the mountain pose and work towards harder poses.


Precautionary measures while practicing yoga for people with arthritis 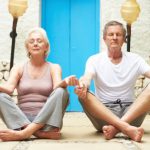 For people who are generally in good health, the common rule with exercise is “no pain, no gain.” This means if you aren’t feeling a little bit of discomfort, you likely aren’t receiving any benefits from the activity you are participating in. The saying does not apply to people with arthritis who are exercising. This goes for yoga, too.

If you have arthritis, are in a yoga pose, and experience pain – Stop!  When arthritis sufferers are doing backbends or are instructed to do long outstretched extensions, they should opt to keep them relatively small. It is also advisable not to hyper-extend the neck, but instead keep the head in line with the rest of the spine.  If you have arthritis in the hip area, you should be careful doing yoga poses that require extreme rotation of the hips.

When you first start with yoga, it is important to be gentle. You might think you are not getting any benefits, but you likely are. If you are over-doing it, sometimes you don’t feel pain until a few days after class, so give it some time. If you do not experience any pain after two or three days you can decide whether or not you want to increase the intensity.

Since it is enjoyed worldwide, studies continue to be conducted on yoga and exercise. While it started out in India as a spiritual practice and slowly evolved into a physical activity, its growth across North America has helped many people, who for various reasons, have been unable to participate in high-intensity workouts.

Information gathered by the Sports and Fitness Industry Association shows that today yoga is as popular as golf. Meanwhile, The Wall Street Journal reports that some yoga classes are so overcrowded that yoga enthusiasts are getting into fights over mat space. While we don’t recommend arthritis sufferers start wrestling for spots; the most recent research on yoga and arthritis seems to suggest that talking to your doctor about yoga poses and giving it a try could bring you some welcome relief.

The answer to depression and anxiety for seniors? Yoga