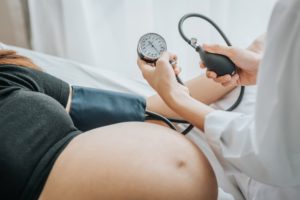 New research shows that women who experience hypertension during pregnancy have an increased risk of developing heart disease later in life. The findings show that these women could develop cardiovascular disorders, including stroke and heart failure.

The study from King’s College in London had a team of researchers that studied electronic health records from 1997 to 2016 to recreate a UK population-based cohort of 1.3 million women covering nearly 1.9 million completed pregnancies. Statistical analysis was used to determine the connections between hypertensive disorders of pregnancy, such as preeclampsia with 12 cardiovascular diseases.

The outcome of the study showed that during the 20-year study period, there were 18,624 cardiovascular events that occurred, of which, 65% occurred in women under 40 years of age. This included events such as heart attacks, heart failure, and stroke.

It was also shown that women who had one or more pregnancies affected by preeclampsia or other types of pregnancy hypertension were more likely to suffer a cardiovascular event such as stroke, heart attack, heart failure, or similar event.

It is estimated that up to 10% of women can develop high blood pressure when pregnant, often causing complications in women, which could result in early delivery of the baby. But this new study brings light to the fact that the risks associated with high blood pressure during pregnancy don’t end once the baby is born. Cardiovascular risk can occur in women with previous pregnancy high blood pressure as early as one year after pregnancy.

Lead author Dr. Fergus McCarthy from University College Cork said: “This research further supports the evidence that what occurs in pregnancy has lifelong implications for a mother’s health. By looking at pregnancy outcomes, we may have an excellent opportunity to identify women at high risk of cardiovascular disease and offer them early interventions after pregnancy to try and reduce this risk. It is critical now that we focus our research on potential interventions to improve the long-term health of mothers.”

The results of this study show that women need more information about the risks associated with high blood pressure during pregnancy. There needs to be more research done to find out what interventions work best for these women so they can reduce the risk of heart disease later in life. It is essential that healthcare professionals continue to work towards determining which interventions such as diet modifications, exercise, or medications could help to protect the heart of these soon-to-be mothers.