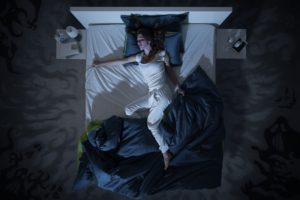 Women experiencing night sweats due to menopause may be more vulnerable to cognitive dysfunction, according to a new study. Experts have found a link between sleep duration due to night sweats and prefrontal cortex deficits.

The study presented during The North American Menopause Society (NAMS) annual meeting found that women with a history of breast cancer who experience night sweats due to menopause tend to have greater sleep duration. These same women also became more vulnerable to prefrontal cortex deficits, including decreased attention and executive function, as their sleep duration increased. It was noted in the study, however, that total sleep time was unrelated to cognitive dysfunction.

This study shows a difference between hot flashes during sleep and previous studies that have made a connection between daytime hot flashes and worse memory performance.

“This work presents novel insights into the influence of menopause symptoms on cognitive performance among women with a history of breast cancer and raises the possibility that hot flash treatments could benefit cognition in these women through effects on sleep,” says John Bark, lead author of the study from the behavioral neuroscience doctoral program at the University of Illinois at Chicago.

Hot flashes and night sweats occur before and during menopause because of changing hormone levels, including estrogen and progesterone, affecting the body’s temperature control. There is no known cure for hot flashes, and women can experience different symptoms. This study shows the relevance of hot flashes during the night in women with a history of breast cancer.

Although conclusions for this study were drawn on a small percentage of women with cancer, research such as this is crucial in helping physicians provide effective treatment options for all menopausal women who are suffering from cognitive decline. Some women learn to deal with menopause-related hot flashes and night sweats and can live a normal life with them, but for others, they can be quite disturbing.

For those who report cognitive difficulties such as forgetfulness, distractibility, and feeling foggy-headed, healthcare professionals need more research to find new treatments to help during this time in women’s lives.