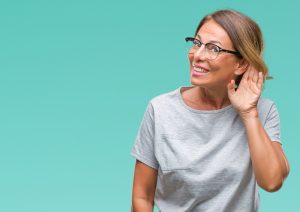 Now, here’s something you want to hear: hearing retention is on the rise, particularly among aging women.

Hearing loss is a common occurrence with advancing age, but new research suggests that hearing loss is becoming less common than it once was.

Researchers from the University of Toronto studied hearing loss between 2008 and 2017 and found that rates decreased over time. In the earlier years, 16.3 percent of U.S. adults reported hearing loss. By 2017, that number had dropped to 14.8 percent or 739,000 fewer people.

The people sampled in the study were 65 and older and had their hearing assessed each year of the trial period.

Better hearing is closely associated with better overall health and life quality. People with good hearing are more likely to stay engaged with those around them, maintain confidence and independence, and enjoy a lower risk for Alzheimer’s and dementia than those with hearing trouble.

Interestingly, the study found that women accounted for virtually all participants who experienced less hearing loss. The hearing loss actually increased in men by 2 percent, while the odds dropped significantly, but 10 percent, for women.

These findings were true even when participants were grouped in the following age cohorts: 65-74; 75-84, and 85 and older.

Although researchers weren’t sure why the gender differences occurred, the study authors think it may have something to do with anatomical differences, smoking habits, and noise exposure.

This is pretty good news, for sure. And remember, you can help protect your hearing ability by listening to music/television at a moderate level, keeping windows facing loud streets closed, and wearing earplugs at major events like theaters, concerts, and sporting events.