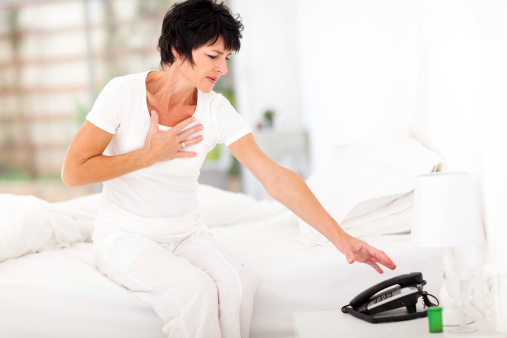 If you were having a heart attack, would you know it?  If you’re a woman, there’s a chance you might miss the warning signs. While a man clutching his chest or grabbing his left arm often comes to mind when you think about what a heart attack looks like, recent research published in JAMA Internal Medicine found that one in five women under the age of 55 having a heart attack don’t experience any chest pain, and many have no idea that they are experiencing anything of serious concern at all. The results from this study have profound implications for at-risk patients and medical practitioners, as it becomes more apparent that every second counts when it comes to surviving a heart attack.

Click here to learn more about reducing your risks of heart disease and strengthening your heart health.

Study on Heart Attack in Women

The current study was led by the Research Institute of the McGill University Health Centre.  The information used for the study was obtained from partner institutions across Canada, including the University of British Columbia. The researchers evaluated data from more than 1,000 young patients who were hospitalized with acute coronary symptoms (ACS).  They found that women were less likely than men to experience chest pain or to be aware that they were experiencing a heart attack.  However, at the same time, the study showed that young individuals, including women, who came into the emergency room without chest pain but with other classic signs of acute coronary syndrome (ACS) (weakness, shortness of breath, rapid heartbeats, etc.) were in crisis.  Women under the age of 55 were more likely to have their ACS symptoms misdiagnosed compared to men with the same symptoms, which ultimately led to a higher risk of death. Interestingly, the researchers also found that the lack of chest pain in women did not correlate with less severe heart attacks.

The researchers state that chest pain, age and gender are no longer the parameters that should define a heart attack diagnosis. Other ACS symptoms need to be recognized and new standards for assessments need to be developed to assess and treat other groups of heart attack sufferers, such as younger women.

Most people will think of crushing chest pain with radiating pain down the arm as the classic symptom of a heart attack, but not all women will have this well-known symptom. There are a number of other symptoms that may not be as clear cut as chest pain that most men experience during a heart attack.  It’s vital that women and health care practitioners be aware of other symptoms in order to make an accurate diagnosis resulting in a better chance of survival.

It’s important to remember that not every individual who is having a heart attack will have all of the symptoms mentioned above.  However, if you experience any atypical symptoms, they should not be ignored. Get checked out by your medical practitioner immediately.  And, if you have a number of the symptoms mentioned above, you should call 911 immediately – every second counts when it comes to surviving a heart attack.