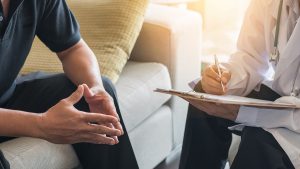 According to a new study published in The Journal of Urology, prostate medication may be associated with an increased risk of heart failure. Benign prostatic hyperplasia (BPH), also known as enlarged prostate, is a common condition that is widely treated with pharmaceutical medication.

This common condition in older men occurs when the prostate gland becomes enlarged, causing urinary symptoms, which include frequent and difficult urination. There are many types of medications to treat the condition, but researchers believe the risk is highest in men taking a type called alpha-blockers (ABs), rather than a different type called 5-alpha reductase inhibitors (5-ARIs).

Dr. Robert Siemens, MD, spoke about the research saying, “While no one should stop taking their BPH medications based on these results, our study contributes new evidence for understanding the complex interaction of factors affecting heart disease risk in men with BPH.”

As both BPH and cardiovascular disease are common in older men, the findings may reflect shared risk factors or causes. Previous trials have suggested that men taking medication for BPH may be more likely to develop heart failure. However, other researchers say they have found no link.

Dr. Siemens and his colleagues of Queen’s University, Kingston, Ontario, set out to fill the gap of information on this risk factor. For the study, more than 175,000 men diagnosed with BPH were analyzed. About 55,000 patients were being treated with ABs alone, 8,000 with 5-ARIs alone, and 41,000 with a combination of ABs and 5-ARIs. The rest were not taking either type of BPH medication.

In the study’s conclusion, it was found that men who were taking ABs and/or 5-ARIs were more likely to be diagnosed with heart failure. The risk of developing heart failure was increased by 22 percent in men taking ABs alone, 16 percent for those taking combination therapy, and 9 percent for those taking 5-ARIs alone. These were all compared to the control group of men not taking BPH medications.

The risk was also higher in men taking ABs for a prolonged period, meaning 14 months or longer.

Since men may be on these medications long term, researchers suggest that physicians who prescribe medications for BPH should be aware of the possible relationship and regularly check patients, especially those with previous heart disease cardiovascular risk factors.

It may be helpful for those already on the BPH medications to have a discussion with your doctor about the risk factors for heart failure. As there are other types of medications and natural alternatives, there may be a way to lower heart failure risk.