Home » Uncategorized » Why Your Produce Is Coated with Invisible Toxic Metals 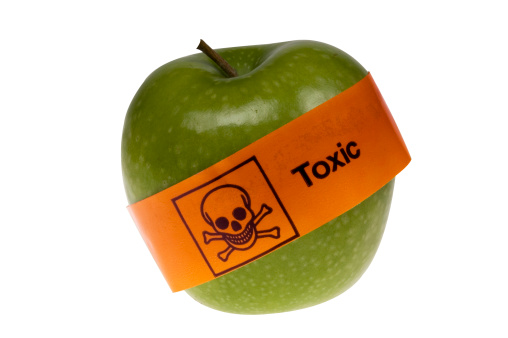 There’s no arguing that technology can be a good thing. At its best, technology makes life safer and more convenient. For example, advances in medicine and nutrition science have virtually eradicated certain diseases, while advances in communications and avionics have shrunk the world in ways our forbears could never have imagined. But if history tells us anything, it warns that technology can be a double-edged sword.

Nanoparticles are a perfect example. You’ve probably heard of nanoparticles, if only in the context of sunscreen. Some modern sunscreen products incorporate nanoparticles of zinc oxide or titanium dioxide to combat ultraviolet damage to the skin. But did you know that similar metallic nanoparticles are also lurking in your food? Sub-microscopic particles on your skin are one thing; but deep within your body? That’s a cause for concern.

Unfortunately, few of us know much about these particles – disturbingly, this also includes the scientific community and the manufacturers that use them in their products. Are they truly safe to ingest? Even experts don’t know for certain how they may affect human health.

But despite their unknown long-term consequences, nanoparticles are already turning up in our food supply. In fact, you likely ingest these ultra-microscopic objects regularly, and you don’t even know it.   To be clear, nanoparticles are so small they’re invisible to the naked eye; too small, even, to be visible under an ordinary microscope. They’re measured not in centimeters, or even millimeters, but in a measurement known as nanometers. To put this into perspective, a few tiny grains of salt laid side by side measure about a millimeter wide. Divide that a million times, and you have a nanometer.

Numerous substances are now produced in nanoparticle form. Nanoparticle technology is being harnessed to improve drug delivery, for example. Nanoparticles of various metals or their oxides—including gold, silver and titanium—are increasingly used in a wide range of industries, for various purposes.

Zinc oxide is one common example. Ordinary zinc oxide has served as a prime sunscreen ingredient for decades. It’s an excellent choice because it’s chemically inert, perfectly safe, and effective at physically blocking ultraviolet rays from penetrating the skin, where they might otherwise cause damage to skin cells and DNA.

But zinc oxide had an image problem. Specifically, zinc oxide ointment is lily white and stays that way on the skin. It prevents sunburn, but who really wants to look like they’re wearing war paint in public? Technology has allowed manufacturers to shrink the size of zinc oxide particles to nano-scale. It remains an effective physical sun-block, but is now virtually invisible on the skin. That’s good news for your appearance and your skin. But is it good for the environment? And, shrunken to sub-microscopic proportions that now allow this metal to enter your pores, your organs, your bloodstream and even into your cell membranes, is it really safe for your health?

Again, with inadequate research, it’s still hard to be sure. Relatively scant attention has been paid to the implications of foisting this technology on the public without due safety review. The simple fact that no proper research has been conducted to determine the safety of nanoparticles (and that we’re already ingesting them) is most frightening.

Pardon Me, There’s a Nanoparticle in My Soup

The food industry has already jumped onto the convenience bandwagon of this under-studied technology as well; in fact, nanoparticles have been in our foods for decades. A 2012 study published in Environmental Science and Technology found millions of tons of titanium dioxide nanoparticles being used in the food and personal care industries annually. The foods highest in titanium dioxide nanoparticles included popular-brand candies, chocolates, puddings, chewing gums, pre-mixed frostings, cookies, sugar-covered donuts and baked goods, and even coffee creamer. But if you wanted to steer clear of such metal nanoparticle food additives, you’d have a hard time of it; government regulation, as of now, does not require nanoparticles to be labeled. To make matters worse, even many food manufacturers aren’t aware of these particles in their own products, as they are often added later by suppliers.

Manufactured foods aren’t the only bearers of unlabelled nanoparticles either – fresh produce is now also playing host to them. According to Mengshi Lin, Associate Professor of Food Science at the University of Missouri, silver nanoparticles are already being used as pesticides by many farmers, who spray them on crops regularly to suppress the growth of insects, molds and other threats to the harvest. And that’s a concern, says Lin, since “…the contamination of [engineered silver nanoparticles] in foods and water may pose a great risk to public health and the environment.” Traditional forms of washing and rinsing produce treated with nanoparticle pesticides are insufficient to remove them from the food’s surface, and it has been discovered that these tiny particles even penetrate into the insides and pulps of produce as well.

Professor Lin is concerned because we simply don’t have answers yet about the safety of these substances in the food chain. He notes that nanoparticles easily pass from the digestive tract to circulate in the bloodstream and lymph system. They may end up in areas where they do not belong, like the heart, liver, brain, and inside our cells. Worst yet, nobody knows what effects these particles might have on brain cells.

The little we do know is certainly not encouraging. Preliminary studies on rodents show that silver nanoparticles are able to cross the blood-brain barrier (which ordinarily protects the delicate brain from incursions by most foreign substances) and may provoke inflammation, as well as induce DNA damage and genetic instability. The journal of Nature Nanotechnology reported that polystyrene nanoparticles—an FDA-approved substance commonly found in vitamins and food additives—blocked proper iron absorption in chickens and caused changes in intestinal cell structures. Chronic nanoparticle exposure to human gut cells in a petri dish showed the same results. Another recent report detailed the effects of silver nanoparticles on liver cells. Investigators concluded that the results suggest “…evidence of the potential toxicity and [inflammation-producing] potential of nanoparticles in the liver following ingestion.”

The situation seems all too familiar. Technological advances are occurring with ever-accelerating rapidity, and our ability to prevent unforeseen consequences resulting from those advances is dwindling just as quickly. Genetically modified foods provide another example of this “shoot first, ask questions later” approach. While proponents argue they’re essential to meet the growing demand to feed a rapidly growing global population, others worry that these “Frankenfoods” have entered the marketplace and the food chain largely without the approval or knowledge of the public.

Critics worry that foods containing metal nanoparticles may yield unforeseen consequences for human and animal health, not to mention affecting the environment in ways that are difficult to anticipate. The problem is that materials shrunken down to nano-proportions can take on different properties than their original forms. Able to penetrate into the deepest recesses of our cells, there is still no telling how they can change cellular functions, which can have rampant repercussions on our health and on the health of future generations. In our typical excitement to employ new and exciting technologies, we often forget that they often come with hidden costs, many of which are irreversible.

Nanoparticle technology is already a regular part of our food chain, and at the moment, there’s not much we can do to avoid them. What we can do is join the movement demanding more research behind the additives in our foods, and more transparent food labeling practices. We must refuse to be the guinea pigs of the industries that we should be able to trust with our health and well-being.