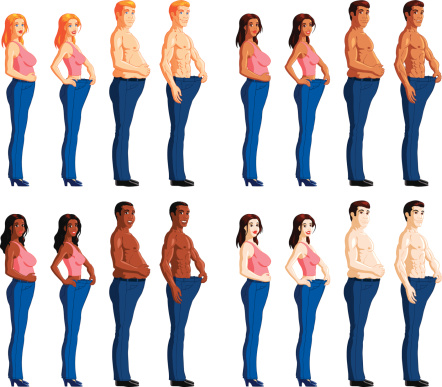 While curvy might be a style statement and plus-sized models graze the covers of fashion magazines, the verdict is in. Scientific research says it is just is not possible to be overweight and healthy.

While the tides of change brought a new wave of voluptuous beauty and larger sizes, the devil’s advocate has come in the form of a study that says it is simply impossible to be physically fit and obese. You can be as confident in your own skin as you want, but you won’t be healthy.

This new study published in the Journal of the American College of Cardiology looked at 14,828 healthy adults comprised of people of all different weights, all with no known heart disease. Researchers found the obese people in the group had a significantly higher amount of arterial plaque build-up compared to people of normal weight.

What was most interesting about this study was the way researchers defined obesity: A person with a body mass index (BMI) over 25. Technically, in the United States, a person is not considered obese until they have a BMI over 35. The difference in numbers could be the start of a revolution redefining what we consider to be overweight.

RELATED READING: hungry all the time? This could be the problem

This isn’t the first time that the idea of “healthy obesity” has been questioned. Studies have looked at obesity being manageable and even healthy if people continued to keep other risk factors in check. For example, if the genetic risk of getting diabetes was low and blood pressure and cholesterol were kept in check, the growing number on the scale could be overlooked.

To further that thought, one 2013 study that appeared in the Journal of the American Medical Association found that overweight individuals tended to live longer than normal weight people. What the headlines didn’t point out was the life expectancy only increased slightly (6 percent) for people who were considered “mildly obese.”

Obesity is an epidemic that leads to heart problems and death. In fact, a person who is obese, but who has normal cholesterol and blood pressure numbers, is still at higher risk of dying from heart disease because of the obesity alone.

Alternatively, the researchers are quick to point out that there is such a thing as thin and unhealthy, too. So a healthy lifestyle is the ideal, thin or not. Don’t think that just because you are thin, that gives you a free pass!

Why you need to be honest about your weight

Another important issue, keeping in mind these recent findings, is the self-perception of being overweight. If you’re not willing to see the potential for obesity-related problems, prevention can’t happen. Taking a hard look at yourself and gauging your risk factor for heart disease based on your size starts with an honest look at your size.

The U.S. National Center for Health Statistics conducted a survey this year asking subjects if they thought their weight fell into the normal range. As a rule, overweight women were considered to be much more realistic about their images than men. In fact, 91.8% of women who defined themselves as obese actually were, while only 83.4% of obese men considered themselves obese.

For the study, 27.5% of women and 29.8% of men saw themselves as being thinner than they actually were by medical definition.

RELATED READING: Diabetic or pre-diabetic? Here’s why breakfast is so important

Heart disease, obesity and death are all related

This all goes to show an honest look at the numbers on the scale is warranted. Heart disease and obesity are closely related, and heart disease is a leading cause of death.

There is no such thing as healthy obesity, so people need to accept they may be in the danger weight zone and take action.

Just because obesity is common and widely accepted doesn’t mean it should be. If taking an honest look at the scale and realizing you need to lose a few pounds is the one way to live longer, wouldn’t you want to try?

Let’s not ignore this wake-up call and make some lifestyle changes for the better.