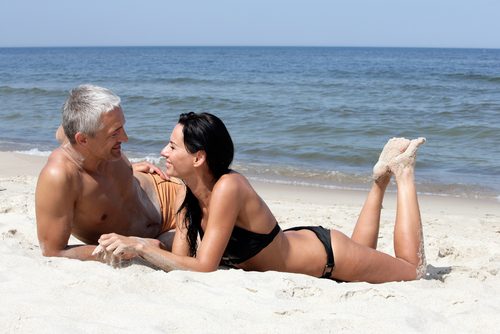 Michael Douglas is 70 years young. The Oscar-winning actor has battled throat cancer, alcoholism and family hardships, but it’s worked out for the best, he says, and I’m not surprised.

He’s an older man. Yes, he’s a celebrity with bags of money and married to one of the world’s most vivacious women ever, Welsh actress Catherine Zeta Jones, but I think he’s also very much a symbol of the new era of men over 60. These are the men who have experienced life, conquered fears and mustered through the hard knocks.

There’s a certain wisdom and vitality these men have that sets them head and shoulders above the guys half their age. The ones with the chiseled pecs and thick luxurious hair in Calvin Klein underwear ads. Those boys don’t measure up.

RELATED READINGS: 4 reasons why watching TV is actually good for you

Life’s simple pleasures get better with an older man

What these mature men may not even realize is they have an advantage when it comes to women, whether she’s the committed long-time spouse who has loved them for better or for worse, or the divorcee who is looking for a relationship. She knows the older man is life-smart and established, well beyond the dalliances of youth and sewing wild oats.

What do women want? Companionship, care and respect. No one wants to grow old alone. At a certain point in our lives, most of us come to this realization. In our most senior golden years, we want someone to be there for us, to share our day-to-day.

I may be speaking in sweeping generalizations, but I think if we all look deep, deep within our hearts, we want a meaningful connection with someone to see us through and hold our hand.

These days, I think fewer and fewer men turn into grumpy old men. They may, I freely admit, be loud and whiney when a cold strikes or they’re fighting a stomach bug, but the new 60-plus man is much more a product of our health-conscious society.

These guys aren’t out at clubs, buying girls drinks or partying the night away. They’re not using recreational drugs or eating takeout every night of the week. They’re more likely the ones taking care of themselves, exercising in the early morning, getting their vitamin D and fish oil, and aiming for a solid seven or eight hours’ sleep. I’ve noticed more senior men in my yoga classes every time I go!

When health is a priority…

Over the last few decades, our understanding of what we eat and drink, what we do to keep our bodies fit and firm, how we stimulate ourselves mentally and, well, sexually, has come a long way. So the men who have tuned into this era of self-focus and self-improvement have reaped the benefits. They are fitter, more able-bodied, and living longer than ever before. And that’s pretty darn attractive.

And don’t go thinking that older men aren’t sexually active or asking their doctors for Viagra. An extensive study in 2010 found that men 75 or older are still sexually active and say they’d like to be having more sex.

In this study, researchers examined a survey of almost 2,800 Australian men who didn’t live in nursing homes or other health-care facilities. They asked the men if they’d had sexual activity with a partner, not necessarily intercourse, within the past year.

Close to 49 percent of men aged 75 to 95 considered sex at least “somewhat important.” Just under 31 percent had been sexually active with another person at least once during the previous year.

When I ran a 5K race in Ottawa last year, I also cheered on the sidelines for my sister’s half-marathon race. Maybe I shouldn’t have been, but I was surprised by the number of senior male participants in the half-marathon. That’s a tough race and yet here these guys were in their glory, sweating it out doggedly among the pack, fighting their way along the route just like everybody else.

People can be so amazing sometimes, and that memory has stuck. Don’t underestimate the old guys, ever.

Death rates for heart disease, stroke and other diseases have also dropped, so while we hear about the overwhelming numbers of people with diabetes, obesity, depression and anxiety, there are other signs that life is good in 2014 and it’s getting better all the time.

People are living longer, and expectations of life after retirement are that much higher. We want our golden years to be fulfilling and exciting – experiencing new things, volunteering or consulting, pursuing our passions.

Why are so many seniors skydiving and climbing mountains? Former U.S. President George Bush Sr. marked his 90th birthday with a skydive in Maine in June, with the help of some army veterans. Why? Because he could!

Getting your second wind

I think the secret to getting what you want from life is understanding that what you do right now, today, drives your future. It’s never too late to try to do something amazing.

At 62, J.R.R. Tolkien published the first volume of his fantasy series, Lord of the Rings. At 65, jazz artist Miles David performed his final live album just weeks before he died. At 73, Larry King celebrated his 50th year in broadcasting. At 92, retired U.S. Navy surgeon Paul Spangler completed his 14th marathon. The list goes on…

There’s so much less expectation for the mature man to have to prove himself to anybody, which is liberating. I’m sure there’s a sense of fearlessness, knowing that these are the days to make the most of. Death comes for everybody at some point, and this is no dress rehearsal.

So hear this, all you men fretting over your greying hair and crow’s feet: Take it all in stride! We know you’ve been around the block and there’s no shame in that. Keep up the good health habits and poker nights. When it comes to us women, you certainly have the advantage.