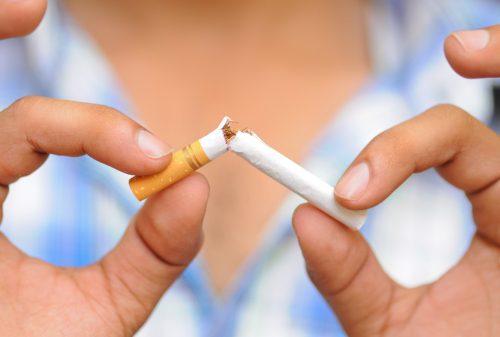 If you’re a smoker and you’ve put off quitting because “the damage is already done”, think again. Research recently published in the Archives of Internal Medicine shows that smoking is a risk factor for pre-mature death and that quitting at any age is beneficial.

The researchers looked at 17 previous studies on smoking and mortality. Current smoking was associated with an increased mortality rate in all of the studies. Smokers aged 60 and over were 83% more likely to die at any age when compared to non-smokers. The beneficial results of smoking cessation were found in all age groups, including those 80 years and older. One British study found that at age 80, 59% of non-smokers were alive, while only 26% of smokers were alive. Although the research does not show, for certain, that smoking is responsible for the difference in death rates, the researchers believe that it’s possible because the chemicals found in cigarettes are known to cause cell damage and because people who smoke more live shorter lives than those that smoke less.

Effects of Smoking on Your Immune System

Smoking causes damage to your immune system by decreasing the antibodies that protect you against foreign substances, making smokers more susceptible to illness. Because of this immune system damage, smokers often take a longer time to recover from infections. In addition to immune system antibody damage, the chemicals in cigarettes travel through a smoker’s bloodstream and interfere with the normal immune response. For example carbon monoxide travels through the body and interferes with oxygen levels which have a negative impact on many body systems including the heart, muscles, lungs and many other organs. In addition, the airways of the lungs narrow thereby decreasing lung function. Additionally, increased mucous in the lungs also decreases lung function. Damage to the lungs can result in serious lung infections.

Can the Damage be Reversed?

The good news is that damage to your immune system can be reversed if you quit smoking. The American Cancer Society reports that at 8 hours after quitting the carbon monoxide levels in your blood drops to normal and the oxygen levels in your blood increases to a normal level. This allows oxygen to flow freely throughout the body. Between 2 weeks and 3 months after quitting, your lung function will increase by up to 30%. Circulation will improve at this time as well which will make walking and other physical activity easier to perform. Between 1 and 9 months after quitting coughing, sinus congestion, fatigue, and shortness of breath should decrease. The cilia in your lungs will regrow which will help your immune system to fight off infection. From one year onwards after you quit, many other health benefits are seen, including a decreased risk of many types of cancers and coronary heart disease. The research shows that the damage caused by smoking, including damage to your immune system and decreased lung function, can all be repaired, at least in part.

If you’re a smoker, it’s never too late to quit – some of the damage is reversible. Speak to your doctor about resources that are available for smoking cessation and get on track to a healthier life.