Home » Anti-Aging » Which Gender Handles Getting Older the Best? 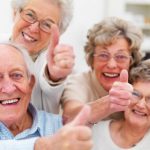 There have been countless facts and figures relating to the male vs. female battle as a whole. And while it varies from country to country, there is one pretty well known truth. Women seem to win when it comes to the longevity battle, having a life expectancy that is considerably longer than their male counterparts – there is one question that doesn’t come up quite as often.

The Surprising Reveal – Women Win the ‘Getting Older’ Battle in More Than One Way!

It appears that studies are not only showing women have a longer life expectancy, but also that they tend to live up to the theory of aging more “gracefully” as well. Part of this thought process could be because women have traditionally been more self aware when it came to dealing with personal matters, making them more likely to live longer, as they have a better understanding of what is going on with their body, mind and health. Women appear to not only have this in their corner, but they also have an easier time securing the proper resources and support systems required for a long and happy life.

Women Deal With Emotional Stress and Anxiety Better Than Men, Too…

One study published its results in Psychology Today, makes mention of the fact that women’s lives appear to get better as they age, while men stay the same, or take a slight downward spiral in terms of quality of life. Women win again in the area of overall mental wellness, having significantly lower instances of depression, anxiety and suicide.

The reasons for this aren’t too far-fetched either. Alongside women’s ability to deal with matters of an emotional nature in a more calm way, the self awareness they possess only helps when it comes to properly handling their emotional situations. Women possess qualities like patience and the ability to listen, qualities that are seen in their male counterparts, but not with the frequency that women do.

Why Do Men Fall Short in Areas of Stress and Anxiety Maintenance?

Study authors across the board are quick to note that all men aren’t affected in the same way, and there are men who possess these qualities, but when it came to aging, and older adults and their views of getting older, men were much less likely to put coping mechanisms into place to deal with complex life challenges than women. This allowed women to move past them on many fronts including longevity, attitude towards getting older and overall emotional health (stress and anxiety management)

Where Do Women Get This Strength to Cope With Aging?

Experts show that the universal answer to this question is pretty simple. Women over 50 years old especially tend to find their strength to face the day and take on getting older from within, not from material possessions and beauty as was previously considered. As the idea of the mature woman comes more to fruition, so does the idea that women are placing a certain emphasis on emotional maturity as well.