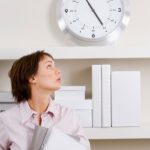 Studies show that many people get hungry and irritable at around 3 or 4 p.m. Grabbing a small snack like an apple can provide the energy boost people need to get them through until dinner time.

But a new survey claims that sugar may not be the only thing that crashes at this time of day – women’s self-esteems do as well.

A survey commissioned by the tanning brand St. Tropez concluded that women look their worst at 3:30 p.m on Wednesdays. It turns out that two-thirds of those questioned said they experience a “slump in energy” every Wednesday afternoon.  At least one quarter admitted turning to sugary snacks to boost their physical stamina and mood. The women in the survey also talked about Wednesday being the most stressful day of the week. The end result seems to be tired skin, puffy eyes, and in the long run, an aging appearance. Interestingly, the same ladies reported that Thursday is a much better day. On this day they feel better, have more energy, their tired skin suddenly looks fresh, and they say they are more likely to have sex.

Look Younger, But Don’t Act It

Those who participated in the survey were asked a series of questions that included behaviors and habits. The survey team discovered that 46 per cent of women drink alcoholic beverages during the weekend. Skin experts with St. Tropez say it can take up to 72 hours for the effects of toxins in alcohol to have a strain on your body. They also suggest that if a woman has had a lack of sleep on the weekend or on Monday, the impact won’t be seen until Wednesday, which would explain the tired skin and aging appearance. Seven to eight hours of sleep every night is recommended for anti-aging.

According to the skin experts, that tired skin and aging appearance can be attributed to a combination of the wrong snacks, mounting stress, behavior from the weekend, and a lack of sleep, all accumulating.

Some critics say that St. Tropez followed up its study by announcing the development of a new anti-aging product called ‘Gradual Tan Plus Anti-Aging Multi-Action Face.’ Others have slammed the survey for not being “scientific” enough.

Studies Say You Can Look Younger If …

Although the days of the week are rarely mentioned, there are some scientific studies that seem to support the St. Tropez survey. For instance, a group of scientists from Leiden University Medical Centre in the Netherlands and Unilever in the United Kingdom conducted a study indicating that higher concentrations of blood sugar lead to an older appearance. The study measured blood sugar levels in 600 men and women and then showed their photos to a board of 60 independent assessors.

Those with higher blood sugars looked older than those with lower levels. For every 1 mm/liter increase in blood sugar, the perceived age of the person rose by about 6 months. Countless studies have also shown that sugar destroys collagen. When the skin is less supple, it is more susceptible to environmental damage and, therefore, signs of aging.

Research also shows that stress can change the way our skin looks. A study published in the Archives of Dermatology as far back as 2001 demonstrated that stress has a negative effect on the barrier function of our skin. It leads to water loss and impairs the skin’s ability to repair itself.

If you want to look younger, dermatologists recommend nurturing your skin by cleaning it properly and moisturizing daily. Don’t forget the sun block, avoid a lot of added sugars, and try to get a good night’s sleep.