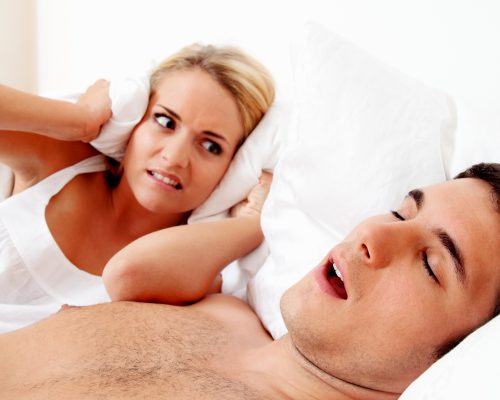 When you’re not getting proper sleep, the side-effects can be less than pleasant, with low energy, low mood and a lowered immune system.

The Centers for Disease Control and Prevention (CDC) has gone so far as to call insufficient sleep a public health epidemic, taking a toll on our health care system. The agency has increased its surveillance of sleep-related behaviors and partnered with the National Center on Sleep Disorders Research to monitor sleep patterns and related outcomes.

So if you’re snoring, it may not be just an annoyance for your bedfellows. It could be more serious than you realize.

You may have sleep apnea, a breathing disorder that causes the airways to repeatedly close while you’re sleeping. A common symptom is loud and frequent snoring (your wife may have informed you of this already); but don’t self-diagnose, see your doctor.

RELATED READING: Research says do this to get a good night’s sleep

Obstructive sleep apnea affects roughly 18 million Americans, according to the National Sleep Foundation. Smoking, chronic lung disease, obesity and diabetes can all cause sleep apnea. In fact, some experts say the condition is on the rise because of an obesity epidemic.


Your heart may be in danger

If left untreated, the chronic progressive disorder can result in serious heart problems.

People who get five to seven hours of sleep every night are also twice as likely to develop early signs of blood-vessel damage, compared to those who  get more sleep, according to a five-year study published in the Journal of the American Medical Association.

A crucial stage in this damage happens when deposits of calcium build up on blood-vessel walls, allowing for the growth of plaques filled with fat, clotted blood and immune cells. Once the blood vessels surrounding and supporting the cardiac muscles, in particular, are damaged, heart disease often results.

A new study from Women’s College Hospital in Toronto, published in the Canadian Medical Association Journal (CMAJ), has found contrary to previous studies, there is no link between obstructive sleep apnea and the development of cancer.

Researchers said older studies only involved a limited number of participants, and measurements may have been affected by bias.

This latest study, on the other hand, involved 10,149 sleep apnea patients, including those who took part in a sleep study from 1994 to 2010. Researchers cross-referenced their own info with health administrative databases between 1991 and 2013. Participants were then followed for an average of 7.8 years.

Interestingly, more than 5 percent of participants were diagnosed with cancer at the beginning of the study. During the follow-up period, nearly 7 percent of them who did not have cancer at the start of the study eventually developed cancer. Breast, prostate, lung and colorectal cancers were the most common. But after considering other cancer risk factors, researchers were unable to support the previously understood link between sleep apnea and cancer.

Nevertheless, she noted that participants in these same studies were not only fewer, but older than those included in her research. They also had a higher body mass index (BMI), not to mention more severe obstructive sleep apnea.

Although researchers couldn’t back up findings from these older studies, they did discover a decrease in oxygen in the blood. They say this was brought on by sleep apnea and the development of smoking-related cancers.

Protect your quality of life

I don’t think this latest study is the final verdict. More research will have to be done. What is certain is the quality of life of sleep apnea patients who are living with cancer, and their tolerance to treatments like radiation and chemotherapy, can be quite different than those without the condition.

So please take note: Sleep deprivation shouldn’t be taken lightly. If you’re having trouble getting proper rest, speak to your doctor.

Related Reading: Why you may not be as healthy as you think