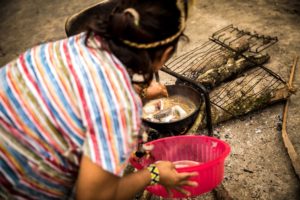 The Tsimane (pronounced chee-may-nay) population live in Bolivia and are considered to have the healthiest hearts in the world. This group of people has very little interaction with modern society. Studies have suggested that these people have a near non-existent risk for heart disease.

Professor of anthropology Michael Gurven explained, “The Tsimane have the healthiest hearts ever studied, so naturally there’s a lot of interest in understanding why and how. The obvious first contender is, what are they eating? And are they eating what we think is best for heart health?”
Gurven and his colleagues decided to dig deeper into the diets of these individuals to better understand what keeps their hearts so healthy.

For starters, their diet is high in carbohydrates, specifically rice, cassava, and plantains. Carbs take about 64 percent of the Tsimane’s diet, but these carbs are high in fiber and unlike the Average American. Tsiman’s fiber intake is about double (the recommended intake of fiber is 30 grams, Americans get nearly 15).

Next, 21 percent of their diet consists of protein, mainly from animal sources, specifically fish and game meats. The remaining 15 percent of the diet comes from fat, with less than one-third being saturated fat.

Their daily average caloric intake is between 2,400 to 2,700 calories a day, and although that does appear high, it is offset by their physical activity throughout the day. These people average 17,000 steps a day where many of us struggle to get in 10,000.

Their bodies are used to gather food and tend to their fields and homes rather than complete conventional exercise.

Furthermore, when you are active, the diet you can have greater flexibility because you are burning more calories per day.

The researchers concluded that the low risk of heart disease is contributed to high intake of complex carbohydrates and high amount of physical activity.

It’s important to note, though, that as of late, there has been more significant interaction with the outside world, which is now creating a shift within the Tsimane’s diet. This means they have increased their intake of lard, oil, and salt, which can all negatively impact the heart. Gurven noted they are deep-frying more and adding more sugar to their beverages.

Another note is that the Tsimane people aren’t the ideal healthy population, as they have high levels of infection, inflammation, and overall low life expectancy. But researchers were intrigued by the low rates of heart disease, which is what prompted the further examination of their diet.

We all know that to protect the heart, we need to eat well, This this means reducing our intake of saturated fat, sugar, and other refined goods along with exercising regularly.