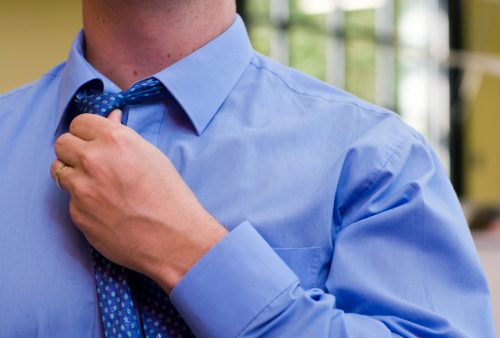 If men want to look professional or formal, wearing a suit and tie is the only option. These items are a staple in every hard-working man’s closet. It often conveys a sense of professionalism and maturity to others and perhaps even promotes a status of wealth. However, according to a recent study, your suit and tie may be working against you. Wearing a necktie may be damaging your eye health, leading to an increased risk of glaucoma.

Glaucoma is a progressive condition. Over time, pressure builds up in the eyes and leads to optic nerve damage. Intraocular pressure—pressure within the eye—damages the cranial nerve responsible for sending the images you see to the brain. When this nerve becomes damaged, it can lead to significant sight impairment or even blindness in just a few years.

One of the most troubling aspects of glaucoma is that, in its initial phase, it may not present with any symptoms. It isn’t until you start to notice problems with your vision that glaucoma cases are diagnosed. It is recommended that those over 40 who have a family history of glaucoma have a complete eye exam every one-to-two years. This is especially important if you suffer from a health condition like diabetes, as it can also affect eye health.

The researchers wanted to see the effect a tight necktie would have on intraocular pressure. They gathered 40 male subjects, 20 of which were normal and the other 20 had open-angle glaucoma. Their measurements involved assessing intraocular pressure with an open collar. They measured three minutes after putting on a necktie and three minutes after loosening said neck tie.

“No one says you have to strangle yourself. If you can’t get your finger in between your neck and your collar easily, it’s too tight,” says study author Robert Ritch, chief of glaucoma services and surgeon director at the New York Eye and Ear Infirmary.

While no correlation can be made saying neckties cause glaucoma, those who are at an increased risk for the eye condition should not wear them at all. Frequent and prolonged use of neckwear could become a real threat to vision.