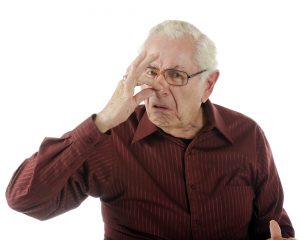 How keen is your sense of smell? Can you appreciate the uplifting scent of fresh-squeezed lemon juice, pine trees in the woods, or the warming comfort of gingerbread just out of the oven?

New research suggests that the inability of older adults to pinpoint smells could mean that mortality is just around the corner. After all, your olfactory system is a critical part of your body’s processes.

RELATED READING: Would you put your health in the hands of the lowest bidder?

Loss of smell considered a sign of serious illness

Our ability to tell the difference between one scent and another affects our appetite and food tastes, our ability to detect environmental hazards and even triggering memories. If your sense of smell is completely lost, it may be a sign of major degenerative diseases, like Parkinson’s and Alzheimer’s – and the loss of life within five years.

That’s according to a study conducted by the National Social Life, Health and Aging Project (NSHAP) and published in the journal PLOS ONE in October. The first of its kind, the study took place between 2005 and 2006 and involved more than 3,000 participants, both male and female.

Putting your nose to the test

Researchers looked at participants’ ability to identify five, run-of-the-mill smells: Fish, rose, orange, peppermint and leather. They were considered to have failed the smell test or be anosmic – if they made four to five errors, to have moderate smell loss (hyposmic) if they made two to three errors, and to have a completely healthy sense of smell (normosmic) if they made no mistakes whatsoever.

During a second round of interviews between 2010 and 2011, researchers analyzed participants who were still living. What they found was that in the five-year gap between surveys, 430, about 12 percent, of the original participants had died.

Now of those who failed the first smell test, nearly 40 percent had died before the follow-up survey. Compare that to nearly 20 percent of participants with moderate smell loss and the 10 percent with a fairly good sense of smell – all of whom died during the same period.

Perhaps what was most interesting, though, was that subjects who were at a high risk of mortality doubled their chances of dying by lacking a sense of smell. When the variables like race, age and socioeconomic status were adjusted, it was clear that subjects with the greatest loss of smell when first tested were far more likely to have died five years later.

RELATED READING: 850 American lives saved because of this…

Death and your sense of smell

Of course, researchers are still not certain that the loss of smell directly increases the risk of mortality. Still, it’s a far better predictor of death than say cancer, heart failure and lung disease. Only severe liver damage, for instance, is a more conclusive predictor.

In the near future, NSHAP’s findings could be the basis of a worthwhile clinical test – one that is easy and inexpensive to identify patients who are most at risk. This is important because early treatment of diseases like Parkinson’s and Alzheimer’s, for example, can help delay and manage symptoms much more effectively.

Try to think of it this way: Losing your sense of smell is like that proverbial canary in the coal mine. Although it doesn’t cause death, it’s an early warning sign that something is terribly wrong with your body – and just the motivation you need to do something about it!