Home » Health News » Want To Reduce Your Risk for Heart Disease? Put This Down 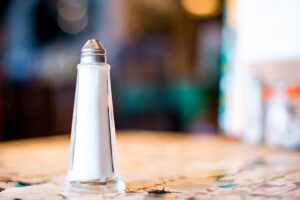 It’s no secret that too much salt can be bad for your heart. It’s one of the most popular seasonings in North America, but it can also be deadly.

Heavy salt intake is associated with high blood pressure, atherosclerosis, and an increased risk for heart disease and heart failure. Typically, people are urged to stay away from processed and packaged foods, which are often loaded with salt, but new research is singing a different tune.

Adding salt to meals at the table can be dangerous, too, and tossing your salt shaker may result in a lower risk for heart disease.

Researchers at Tulane University School of Public Health and Tropical Medicine in New Orleans found that compared to people who always added salt to foods (typically at the table), those who sometimes, rarely, or never added salt to foods had up to a 37 percent lower risk for cardiovascular disease.

The results were published in the Journal of the American College of Cardiology and cannot prove that adding salt to food causes heart disease, only that there is an association between the two.
The team looked at data from more than 176,000 adults. Some of what emerged were that people who tended not to add salt to their foods were women, white, normal body weight, moderate drinkers, non-smokers, and more physically active.

On the other hand, those who tended to add salt at the table were more likely to have heart disease, smoke, and have a lower socioeconomic status.

One of the easiest ways to reduce salt intake is to cook with more spices and seasonings. The foods you normally eat can be seasoned with virtually anything, so why not try something new that won’t add another harmful element to your health?