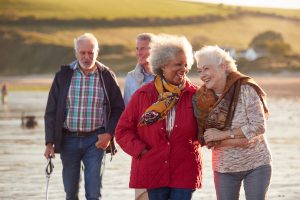 Walking patterns in older adults can predict types of cognitive decline, according to Canadian researchers. The study involved analyzing different patterns in the way patients walk to determine different types of dementia and identify Alzheimer’s disease.

There were four independent gait patterns identified in patients: rhythm, pace, variability, and postural control. Gait is the stride-to-stride fluctuations in distance and timing that happen when walking. High gait variability was associated with lower cognitive performance, which identified Alzheimer’s disease with 70 percent accuracy.

“This is the first strong evidence showing that gait variability is an important marker for processes happening in areas of the brain that are linked to both cognitive impairment and motor control,” notes Dr. Frederico Perruccini-Faria, first author on the paper. “We’ve shown that high gait variability as a marker of this cognitive-cortical dysfunction can reliably identify Alzheimer’s disease compared to other neurodegenerative disorders.”

It has been found that a person’s ability to perform multiple tasks simultaneously is impacted when cognitive-cortical dysfunction is happening. These abilities can include talking while walking or chopping vegetables while chatting with family.

While there has been longstanding evidence showing that cognitive problems can be predictors of dementia, this study helps to build insight into the relationship between motor performance and diagnosis of neurodegenerative conditions.

Dr. Montero-Odasso, who helped lead the study, is known for his research on the relationship between mobility and cognitive decline in aging. He is pioneering novel diagnostic approaches and treatments to help prevent early dementia. This study can add to his mounting research on the subject.

Having gait variability as a motor marker for the cognitive decline could be used for assessment to be used as a clinical test. Dr. Montero-Odasso suggests having patients use wearable technology to track variabilities. He explains that gait is similar to arrhythmia and that health care providers could measure it in a clinic similar to how heart rhythm is assessed with electrocardiograms.

This research helps to forward the prevention techniques and treatments for those who may be at risk for memory problems, cognitive decline, and other neurological health issues. With evidence showing that motor performance, specifically the way you walk, can help diagnose different types of neurodegenerative conditions, doctors may be able to reduce symptoms before the disease takes over.