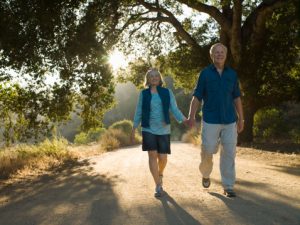 When somebody mentions the word exercise, usually we imagine heart-pumping workouts or lifting heavy weights. We associate such intense activities with exhaustion that one would feel after a training session which leaves us less inclined to the idea of exercise at all. What most people do not realize is that walking is a great form of exercise in itself. Not only is it great for overall body and heart health, but according to new research, the act of walking can significantly modify and increase the supply of blood to the brain.

Walking is considered a great form of physical activity. It can help maintain weight, strengthen bones and muscle, and even improve mood. It can also be modified to best fit your level of fitness, walking faster and more frequently or vice versa to suit your needs. Now another beneficial effect of walking can be added to the list, as researchers at New Mexico Highlands University (NMHU) found that the foot’s impact during walking sends pressure waves through the arteries, helping increase blood supply to the brain.

Previous thinking about cerebral blood flow was that it was involuntary, and regulated by the body. It was thought that during times of exercise or exertion, blood supply to the brain remained relatively unchanged, despite changes in blood pressure that may occur. However, the team of researchers found that the impact of the foot during running results in substantial backward-flowing waves through the arteries that sync up with the heart rate, leading to a dynamic regulation of blood circulation to the brain.
This correlation was extended to walking studies. The research team used non-invasive ultrasound to measure internal carotid artery blood velocity waves and arterial diameters to calculate hemispheric cerebral blood flow on both sides of the brain. A total of 12 young adult participants were included in the study, with the mentioned measurements taken while standing upright at rest and during steady walking—about one meter per second. While there was a lighter impact seen on the foot when walking, it still produced larger pressure waves in the body that boosted blood flow to the brain. Walking was seen to have a greater effect in this respect, when compared to other exercises such as cycling where no foot impact occurs at all.

“New data now strongly suggest that brain blood flow is very dynamic and depends directly on cyclic aortic pressures that interact with retrograde pressure pulses from foot impacts. There is a continuum of hemodynamic effects on human brain blood flow within pedaling, walking, and running. Speculatively, these activities may optimize brain perfusion, function, and overall sense of wellbeing during exercise,” the researchers wrote.