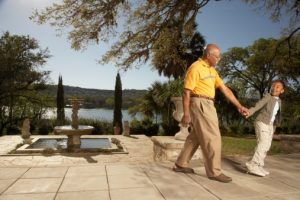 Risk of falls, bone fractures, and injuries increases as we age due to loss in bone density, sudden blood pressure drops, and loss of strength. Even medications we take can put us at risk of falls by causing dizziness and confusion. No one wants to end up in long-term care because of breaking a hip…
Lowering our risk of falling the older we get is a priority.

According to latest research, though, there is something seniors can do that can prevent falls. In fact, walking after a meal can help older people from falling down. That’s because standing up and moving around after eating could prevent the elderly from particular falls brought on by a sudden loss in blood pressure.

While we all like to sit and relax after a meal, we should be taking a stroll first! 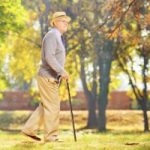 The study, conducted by the University of South Australia and the University of Adelaide, revealed that the dizziness often experienced by older people with low blood pressure – what’s called post-prandial hypotension – can be alleviated by simply walking a shorter distance after eating a meal. In other words, exercise!

Typically, a drop in blood pressure, which is common among older people, is witnessed within two hours of eating a meal and is closely associated with the high rate of falls in this age group. Such spills often lead to fractures, not to mention a loss of independence and confidence. In some cases, they can even be fatal.

Researchers have long tried to understand the reasons why low blood pressure occurs exactly. But this latest study confirms what scientists have long suggested: Older people with low blood pressure should be encouraged to exercise, getting up and walking intermittently and at a normal pace in order to reduce the drop in blood pressure. It strengthens hopes of developing improved treatments or preventing the condition altogether.

Facts about blood pressure you should know right now 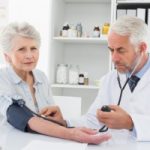 Of course, blood pressure can be unhealthily high, but it can be incredibly low, too. Without a normal baseline, white blood cells – those are part of your immune system – would hardly ever get distributed in and around your body.

What’s more, blood pressure delivers hormones, such as insulin, and those antibodies and white blood cells which are important to your overall immunity. And just as key as providing things like oxygen and nutrients, the fresh blood that eventually gets delivered is able to pick up the toxic waste products of metabolism. Those include the carbon dioxide you exhale with each breath, and the toxins you clear through your kidneys and liver.

After all, blood, itself, transports a number of other properties, including its own temperature. It also carries one of your defenses against tissue damage, in other words, the clotting platelets that stem blood loss.

Seniors walking well into the future

The results of this latest study by Australian universities certainly show that exercise, particularly walking short distances, can be an effective strategy in preventing low blood pressure. It also helps researchers to get the complete picture of this increasingly common problem among seniors.

Do this one thing for healthy blood pressure