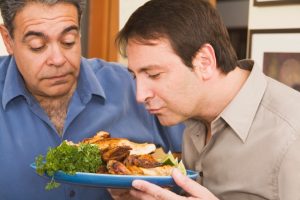 Even without freshly baked goods in arm’s reach, if you vividly imagine their smell you’re more likely to be overweight, says a new study.

To better understand food cravings, researchers presented their findings at the Annual Meeting of the Society for the Study of Ingestive Behavior. Researchers believed that one’s ability to imagine odors could be strongly linked to food cravings and the longevity of cravings. The study was based on Kavanagh’s Elaborated Intrusion Theory of Desire, which suggests cravings can be triggered by the senses – through, smell and sight.

While previous studies have found that food cravings are higher among those who are obese, this is the first study to link the participants ability to imagine odor with being overweight.