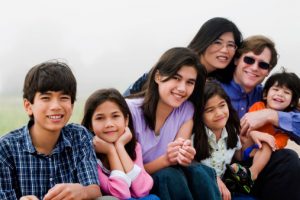 The more children you have, the longer viruses will stick around, says the appropriately termed BIG LoVE (Better Identification of Germs – Longitudinal Viral Epidemiology) study out of Utah.

The University of Utah researchers found that people who lived with no children got cold or flu bugs an average of three to four times a year. But people living with one child saw that number increase to 18 weeks. The number climbed higher for people with six children at 45 weeks a year.

Notably, the researchers found that only half of the people who were infected suffered from the typical coughing, stuffy nose and fever symptoms. The results were published in the journal Clinical Infectious Diseases.

It’s often been joked that children are little germ factories, and the research points to this as the cause. Researchers found that children under age five had one virus for 50 percent of the year. That’s twice as often as people over age five. And those infected kids were 1.5 times more likely to have severe symptoms. The illness would also spread more to adults in households with at least one child.

“A lot families go through wave after wave of illness. In fact, some of the kids we monitored had symptoms for 20 to 25 weeks in a row,” says co-first author Carrie Byington, professor of pediatrics and co-director of the Utah Center for Clinical and Translational Science. “This study helps us to understand what is normal in young children, and can help us determine when illness should be a cause for concern.”

The BIG LoVE study is the first to use modern diagnostics to track illnesses in families. The study examined 26 families totalling 108 people, three of whom were born during the study period. Nasal swabs and surveys were used to collect the data. The swab were tested for 16 different illnesses. Researchers said future studies will explore if the trends hold true in larger and more diverse communities.

Researchers found that some of the viruses held on for weeks after a family member had recovered from infection, with Bocavirus lasting as long as 12 weeks. But typically the viruses persisted for one to two weeks after recovery.