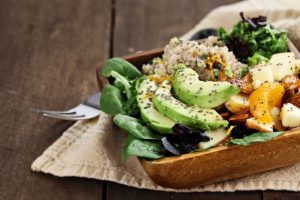 In recent years, more and more people have been turning to vegetarian and pescatarian diets for health reasons. A new study shows how it could be reducing the risk of coronary heart disease. Whether the reason is health benefits, concerns about the environment, or animal welfare, ditching meat has been shown to offer many heart rewards.

A large study published in The BMJ included information on 48,188 people who were recruited between 1993-2001 and had no history of coronary heart disease or stroke. They all had an average age of 45 years.

Researchers grouped participants into groups of meat-eaters (24,428), pescatarians (7,506), and vegetarians, including vegans (16,254). During the study, there were 2,820 cases of coronary heart disease, and 1,072 cases of stroke, including 519 cases of ischemic stroke (when a blood clot blocks the flow of blood and oxygen to the brain) and 300 cases of hemorrhagic stroke.

By the end of the study, researchers found that pescatarians and vegetarians had a 13% and 22% lower risk of CHD than meat-eaters. This is equal to 10 fewer cases of coronary heart disease in vegetarians than in meat-eaters per 1,000 people consuming these diets over ten years.

The authors of the study did note that this could be partly due to lower rates of high blood pressure, high cholesterol, diabetes, and lower BMI.

A Risk of Stroke

But it wasn’t all good news for the non-meat eaters, as researchers did find that vegetarians and vegans had a 20% higher risk of stroke than meat-eaters, equivalent to three more cases of stroke per 1,000 people over ten years, mainly due to a higher rate of hemorrhagic stroke. It is thought that vegetarians and those on a vegan diet both had lower circulating cholesterol and levels of several nutrients than meat-eaters, such as vitamin B12, which could explain these findings.

Professor Mark Lawrence at Deakin University, Australia, who led a linked study suggests that the participant’s stroke risk should be kept in perspective. “It is based on results from just one study, and the increase is modest relative to meat-eaters.”

“Relevance to vegetarians worldwide must also be considered,” he writes. “Participants were all from the UK where dietary patterns and other lifestyle behaviors are likely very different from those prevalent in low and middle-income countries where most of the world’s vegetarians live.”

“Shifting towards plant-based dietary patterns for reasons of personal or planetary health does not necessarily mean becoming a vegetarian,” he added. “Indeed, populations in some low- and middle-income countries who consume very low amounts of animal source foods may benefit from being able to eat a little more of these foods to gain additional nutrients necessary to help combat all forms of malnutrition.”

With many studies linking meat consumption to health issues, it is becoming more apparent than ever that many people need to lower their meat intake. Taking a more plant-based approach to eating doesn’t mean cutting all meat from your diet. Start slowly by going vegetarian one day a week and be diligent in adding in more fruits and vegetables to get the recommended daily amount. You will be surprise by how easy it is to lower your meat consumption, therefore lowering your risk of coronary heart disease and other health concerns.