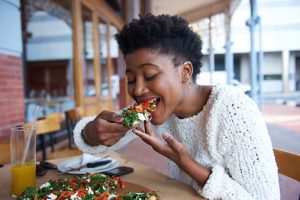 A healthy diet is something we all try to maintain, but it’s hard to stay on track. Low-calorie diets are usually the meal plan of choice for losing weight. However, according to new research, choosing a vegetarian diet over a low-calorie one can help you lose weight more effectively.

Having excess fat not only causes emotional distress but can also lead to several negative metabolic effects. Conditions such as diabetes, high blood pressure, and increased cholesterol are common in overweight people.

According to the researchers, muscle fat is an important factor in glucose and lipid (fat) metabolism and can be a major contributor to metabolic syndrome.

The study in question involved 74 subjects with type 2 diabetes. They were separated into two groups and assigned either a vegetarian or a conventional anti-diabetic diet.

Vegetarian diets consisted of vegetables, grains, legumes, fruits, and nuts. The only animal produce that was allowed was one portion of low-fat yogurt per day.

Conventional diabetic diets followed official recommendations set by the European Association for the Study of Diabetes (EASD). This diet primarily consisted of healthy foods high in fiber that were low on the glycemic index

Each diet was restricted to only 500 kilocalories per day. At the end of the study, the participants on a vegetarian diet lost an average of 6.2kg compared to 3.2kg on the conventional diet.

“Vegetarian diets proved to be the most effective diets for weight loss. However, we also showed that a vegetarian diet is much more effective at reducing muscle fat, thus improving metabolism. This finding is important for people who are trying to lose weight, including those suffering from metabolic syndrome and/or type 2 diabetes. But it is also relevant to anyone who takes their weight management seriously and wants to stay lean and healthy,” said Dr. Hana Kahleová, director of clinical research at the Physicians Committee for Responsible Medicine in Washington DC.

Reduced fat levels were confirmed by the researchers using magnetic resonance imaging, and fat tissue was analyzed in participants thighs for comparison. While both groups did see similar reductions in subcutaneous fats (fat underneath the skin), subfascial fat (fat on the muscle and intramuscular fat) was significantly reduced in the vegetarians.

The researchers did not explain this observation, but it is possible that vegetables low levels of fat contributed to the results seen.