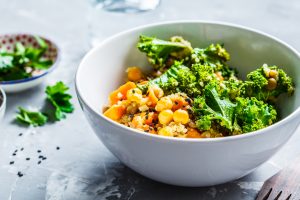 People who follow a vegan diet are at a higher risk for bone fracture. According to a new study published in the journal BMC Medicine, compared with people who eat meat, vegans have a lower calcium and protein intake which contributes to a 43% higher risk of bone fracture.

This is the first comprehensive study to outline the risks of different diets and the relationship with both total and site-specific fractures. Researchers from the Universities of Oxford and Bristol, UK analyzed data from 54,898 people in the EPIC-Oxford study, which included both men and women who were recruited between 1993 and 2001.

Out of the participants included in the study, 29,380 ate meat, 8,037 ate fish but not meat, 15,499 were vegetarians, and 1,982 were vegans when they began the study. All participants were followed continuously for 18 years on average for any occurrence of fractures. During the study, participants reported a total of 3,941 fractures, including 566 arm, 889 wrist, 945 hip, 366 leg, 520 ankle, and 467 fractures at other main sites, defined as the ribs, vertebrae, and clavicle.

Along with a higher risk for hip fractures, researchers found a higher risk for leg fractures and other main site fractures in vegans, vegetarians, and pescatarians. Once BMI was taken into account, there were no significant differences in risks between diet groups for arm, wrist, or ankle fractures. A difference in risk of total and site-specific fractures was partly reduced once BMI, dietary protein, and dietary calcium intake had been taken into account.

Benefits and Risks of Diets

Lead author of the study, Dr. Tammy Tong said “Previous studies have shown that low body mass index (BMI) is associated with a higher risk of hip fractures, and low intakes of calcium and protein have both been linked to poorer bone health. This study showed that vegans, who on average had lower BMI as well as lower intakes of calcium and protein than meat eaters, had higher risks of fractures at several sites. Well-balanced and predominantly plant-based diets can result in improved nutrient levels and have been linked to lower risks of diseases, including heart disease and diabetes. Individuals should take into account the benefits and risks of their diet and ensure that they have adequate levels of calcium and protein and also maintain a healthy BMI, that is, neither under nor overweight.”

Further research is needed to understand the results in different populations and sex. This study included predominantly women who were of European populations. Although researchers were unable to differentiate between fractures that were caused by poor bone health and those caused by accidents, they do caution that following a plant-based diet may not provide enough calcium or protein to build strong bones. If you follow a strict diet, it is important to make sure you are getting the proper amounts of vitamins and nutrients to keep your body in optimal health.