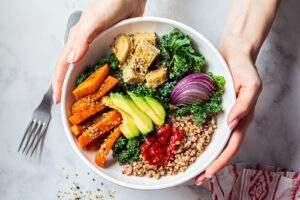 If you are overweight and have diabetes, a vegan diet could be the key to losing weight. A recent study found that people who followed a vegan diet lost more weight than those who didn’t, and they also saw improvements in their blood sugar levels. So, if you’re looking for a way to slim down, a vegan diet might be right for you.

Vegan diets are often associated with several health benefits, including lower rates of obesity and diabetes. While there are many possible explanations for this, one of the most likely is the high intake of fruits, vegetables, nuts, legumes and seeds in vegan diets. These plant-based foods are typically lower in calories and fat than animal-derived foods, and they also tend to be rich in fiber and other nutrients that promote good health.

Moreover, vegan diets often exclude processed foods and refined sugars, which can also contribute to a lower risk of obesity and diabetes. In sum, vegan diets may offer a number of benefits for those looking to improve their overall health.

A vegan diet may be the best way to lose weight and control blood sugar, according to a new meta-analysis of 11 studies. The analysis presented at the European Congress on Obesity found that following a vegan diet for at least 12 weeks helped people lose weight and lower their blood sugar more effectively than a Mediterranean diet, different diabetes diets, or portion-controlled diets did.

The study’s authors say that the vegan diet may be so effective because it cuts out all animal products, which are a significant source of saturated fat and cholesterol. This, in turn, helps lower levels of bad cholesterol in the blood and reduce the risk of heart disease. The vegan diet may also help control blood sugar because it is high in fiber and low in simple carbohydrates, both of which help regulate insulin levels. There was no effect on blood pressure.

Overall, when compared with other diets, following a vegan diet was linked to significant weight loss (an average of 9 pounds) and body mass index (BMI). This is good news for people looking to lose weight, especially those at risk for diabetes. By reducing their weight and BMI, they can help to lower their chances of developing the disease.

The study’s authors say that more research is needed to confirm these findings, but they believe that the vegan diet could be a helpful tool for people with type 2 diabetes who are looking to manage their condition.