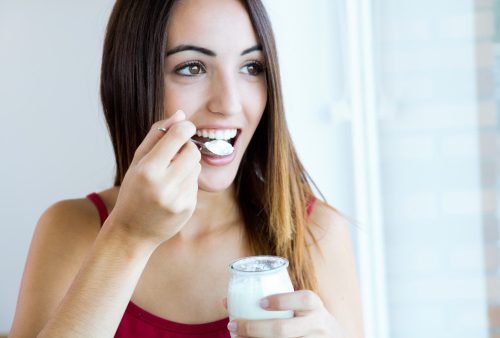 Biting into something and being surprised by its flavor can either be an enjoyable or disgusting experience. However, it may not be so simple. Researchers have found that biting into something pleasant or gross, such as vanilla yogurt, has implications on one’s mood.

Research teams from Food & Biobased Research in the Netherlands, the University of Natural Resources and Life Sciences in Austria, and the VTT Technical Research Centre of Finland Ltd., aimed to uncover emotional responses associated with consuming different varieties of yogurt.

Lead author, Dr. Jozina Mojet, said, “We were surprised to find that by measuring emotions, we could get information about products independent from whether people like them. This kind of information could be very valuable to product manufacturers, giving them a glimpse into how we subconsciously respond to a product.”

To come to their conclusions, researchers used an emotive projection test to determine mood changes from different yogurts. Participants were shown images of other people and asked to rate the individuals in the images on six positive and six negative traits. Judgment can indicate mood and that is why it was used as a way to measure mood.

Three groups consisting of at least 24 people consumed different yogurts to taste. All yogurts were from the same brand and had the same marketing but were of different flavors and fat content. Mood was measured with four tests, including the emotive projection test.

Although liking or being familiar with the brand did not affect emotions, the positive or negative surprise of taste did. Furthermore, low-fat yogurts created higher positive emotional responses. Vanilla yogurt, in particular, had the strongest positive emotional response, which reveals that having slight vanilla scents in areas like waiting rooms could reduce aggression and encourage relationships among patients and staff.

Dr. Mojet concluded, “We were looking for a valid, quick and not too expensive and time-consuming method to measure the emotions or mood changes evoked by food. I strongly believe that sensory and consumer research should be conducted in an ecologically valid way. This sort of implicit method can reveal the complex interactions between the different factors involved in a situation, which, based on his or her memory and expectations, is given meaning by the person under investigation.”

The findings were published in Food Research International.