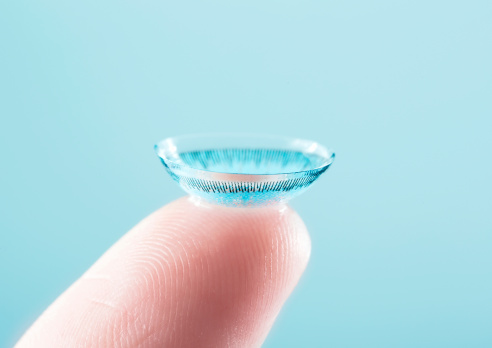 Colored contacts are popular for people who want to switch up their look, but a Korean study found they can also impair vision and eyesight.

The researchers conducted eye exams on 30 participants wearing clear lenses, then repeated the tests with colored contacts. The colored contacts had varying amounts of un-tinted open space around the pupil. The less clear space that was available, the less the participant was able to see. Objects at a distance were blurry, and some lost the ability to detect contrast.

Dr. Oliver Schein from Johns Hopkins Wilmer Eye Institute said, “For the most part, if you are going to wear colored contacts for a few hours on Halloween, the likelihood of a problem is very small.”
Dr. Edward Manche from Standard Health Care added, “Many if not most of the people wearing the lenses obtain them over the counter, online or borrow them from friends. This often leads to poorly fitting lenses as well as use by people with no instruction on the care and wearing of lenses.”

The contacts used for the study had varying amounts of clear space – four, five and six millimeters. Even a one millimeter difference could change normal vision into impaired vision. From this the researchers suggest that if you’re purchasing colored contacts, ensure there is at least six millimeters of clear space.

Dr. John Clements from the Casey Eye Institute said, “If prescribed by an eye care professional and used as directed, most of these lenses are relatively harmless. The most devastating damage occurs when someone gets these lenses over-the-counter for cosmetic use and abuses the lens. This behavior can lead to severe eye infections that may cause blindness.”

Contacts purchased for Halloween costumes can increase the risk of infections and scratches because they do not fit properly or are made with unsafe materials.

If you do choose to wear colored contacts – for Halloween or for everyday use – see your trusted eye doctor to ensure they are the best fit, prescription and comfortable material.

The findings were published in The British Journal of Ophthalmology.