Home » Health News » Use Yoga To Build A Healthier Brain 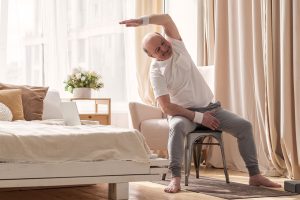 Stretching and exercise are good for your body, but the benefits don’t stop there. Although all forms of exercise can stimulate improved health, yoga may offer some unique benefits.

With its emphasis on breathing practices and mediation, as well as movement, yoga might help reduce anxiety, depression, and stimulate improved cognitive function.

Yoga may develop new connections between brain cells and change brain structure in a way that improves skills like memory and learning. In particular, there is data to suggest it can strengthen parts of the brain that play crucial roles in memory, attention, awareness, and language.

Some studies using MRI scans and other brain imaging technology have shown that people who regularly do yoga have a thicker cerebral cortex than those that don’t. The cerebral cortex is responsible for information processing.

Research also suggests that people who do yoga have a larger cerebral cortex – the part of the brain involved in learning and memory – than those who don’t.

Yoga may even help slow the aging process. The cerebral cortex and hippocampus typically shrink as you get older, but research suggests that yoga could slow shrinkage. One study found that older people who do yoga show less brain shrinkage than non-practitioners.

Mood is another area of brain health that yoga may benefit. Although all forms of exercise are suitable stress relievers that reduce stress hormones and boost feel-good chemicals in the brain, yoga may go a step further.

Yoga may have a unique effect on a brain chemical called gamma-aminobutyric acid (GABA), which is linked with a better mood and lower levels anxiety. This benefit may be exclusive to yoga compared to other forms of exercise.

There are plenty of places where you can begin learning yoga. Introductory-level classes exist, as do those targeted to specific ages and physical abilities. Start slowly to work your way to maximum benefits.