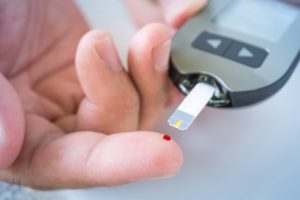 Psychologist Daniel A. Nation explained, “Our findings emphasize the importance of catching diabetes or other metabolic diseases in adults as early as you can. Among people with diabetes, the difference in their rate of developing the signs of dementia and Alzheimer’s is tied somehow to whether or not they are on medication for it.”

It is believed that this is the first study of its kind to look at glucose levels and Alzheimer’s disease risk.

The study looked at tau pathology, which is a tell-tale sign of Alzheimer’s disease. The more tau proteins in the brain, the worse Alzheimer’s progression is. Tau are brain tangles, and when they combine, they create beta-amyloid plaques that disrupt brain signals.

They examinted ten years’ worth of data involving nearly 900 patients, 54 with untreated diabetes. The study compared different diabetic categories, the brain, and spinal fluid, which can indicate beta-amyloid plaques and tau proteins.

Nation added, “It is possible that the medicines for treating diabetes might make a difference in the progression of brain degeneration. But it’s unclear how exactly those medications might slow or prevent the onset of Alzheimer’s disease, so that is something we need to investigate.”