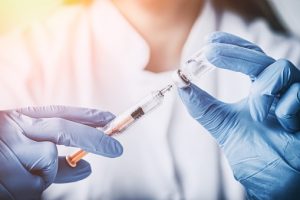 It’s that time of year when the leaves begin to change color and we begin to dress a little warmer. This change in climate also signals something that most people dread: getting the flu shot. While getting a yearly flu shot may seem bothersome, it is absolutely necessary. The influenza virus changes every season making it more difficult to prevent.

This may all change, however, as a team of researchers from the Nebraska Center for Virology is creating a rather unconventional type of vaccine, one that may provide life-long protection against the flu.

“An ideal influenza vaccine would be inexpensive, provide long-lasting immunity, require few immunizations and would work against all variants of the virus,” said lead researcher Eric Weaver, an assistant professor in the School of Biological Sciences at the University of Nebraska-Lincoln.

The flu can be a devastating infection and is sometimes deadly when affecting particular demographics. It is characterized by fever, cough, and body aches, with older adults, young children, pregnant women, and those with chronic health problems at higher risk of serious complications.

An estimated 40 million contracted the flu during the 2015–2016 flu season with about 970,000 people becoming hospitalized, according to The Centers for Disease Control and Prevention (CDC).

Although still in its initial stages, this new vaccine may be the first step towards a universal influenza vaccination. Preliminary experiments on mice was a vaccine combining centralized ancestral genes from four major influenza strains and were found to protect against exposure to lethal doses of seven of nine widely divergent influenza viruses. More impressively, the mice who didn’t receive a higher dose of the vaccine didn’t even get sick.

When compared to mice who only took the more traditional flu shot or nasal spray, all became sick and died when exposed to the same viruses.

The more conventional flu vaccinations used today use weakened to dead forms of the virus to stimulate our immune system to help fight off the infection. However, because influenza mutates rapidly, it is difficult to develop a vaccine with long-term effectiveness. Another hindrance is the fact that when people are affected by the flu, it can take a while before they begin to show symptoms.

It has been shown that the conventional form of the flu vaccine has a less than 60 percent effectiveness rate when they correctly match with the currently circulating strain, and far less effective when not matched.

Unfortunately, this new form of treatment is ways off from being used in humans, but the initial result looks promising. The current estimation is that it will likely take until 2020 or 2025 before a universal flu vaccination is available.

Frog skin may hold the key to a universal flu vaccine