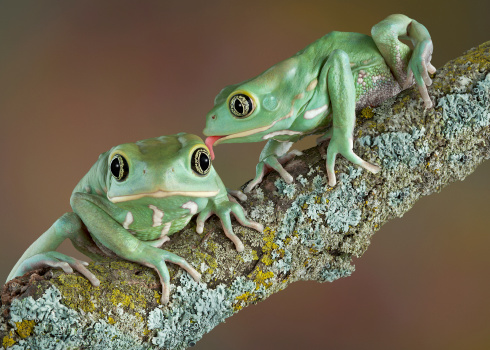 The flu virus, otherwise called influenza, is a contagious respiratory illness that infects hundreds of thousands of people each year and can be more than just a minor nuisance. It can result in mild to severe illness and even lead to death in certain cases. Considering it is caused by a virus, there isn’t much you can do to cure it, but instead, treating symptoms is the route doctors take. However, this may all change soon, because according to new research, a flu vaccine may be in the works that is derived from frog slime found on its skin.

Exposure to the flu virus is often confused with the common cold, as many of their symptoms overlap. While they both are respiratory illnesses and caused by viruses, a common cold is considered mild in comparison. Colds also do not result in serious health problems, such as pneumonia, bacterial infections, or hospitalization, while the flu virus can. The following are common flu symptoms:

Previous research found that frogs’ skin secretes mucus that contains “host defense peptides” known to protect them from harmful bacteria, and the particular secretions from South Indian frogs were observed to act as “anti-flu peptides,” possibly proving to be useful in the production of an antiviral drug against the flu virus. Senior author Joshy Jacob, Ph.D., associate professor of microbiology and immunology at the Emory Vaccine Center and Emory University School of Medicine believes that this would be an invaluable resource if an influenza pandemic were to occur.

To test the viability of this newly discovered frog skin peptide, Jacob and his team collected it using mild electrical stimulation from the skin of the Indian frog hydrophylax bahuvistara, and afterward, they named the peptide “urumi.” When viewing urumin through an electronic microscope, the researchers saw that the peptide disrupted the integrity of the flu virus while being safe on human cells.
To further their experiments, the researchers extended their study to unvaccinated mice and found that administering urumin through the nose protected them against a lethal dose of the flu virus. However, the protection was only specific to some strains of the flu.

What is perplexing to the researchers is that the flu virus does not infect frogs, yet they have a peptide on their skin to combat it.

“Because flu viruses from humans cannot infect frogs, producing urumin probably confers on frogs an advantage in fighting some other pathogen,” said Jacob.

Jacob and his research team are currently exploring other frog-derived peptides that might help treat or prevent viruses, including dengue and Zika, and they hope to develop the antimicrobial peptides from frogs into active drugs.

Related: 16 natural ways to get through a cold or flu

7 common habits that put your immune system at risk