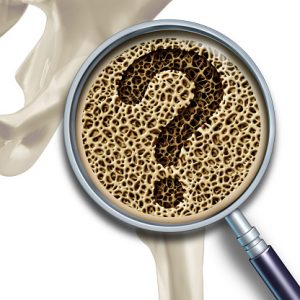 Osteoporosis is a bone condition that affects people as they get older and often leads to an increased risk of fractures. It is characterized by weak and brittle bones that commonly affect the hip, wrist, or spine. Osteoporosis is estimated to cause more than 8.9 million fractures every year, resulting in an osteoporotic fracture every three seconds.

The condition is believed to be caused by the body not being able to renew itself as it does when we’re young. This is supported by the fact that the older you are, the more likely you are to develop osteoporosis.

Bone is constantly breaking down and rebuilding

The pathogenesis in all cases of osteoporosis is an imbalance in the bone resorption and bone formation. Up to 10 percent of our bones are constantly being remodeled at any point in time on a cellular level. An interplay of excessive bone resorption, the inadequate formation of new bone during remodeling, and inadequate peak bone mass are the mechanisms that affect the development of fragile bones.

Researchers from the University of Alabama at Birmingham found that during a malfunction of these mechanisms, progenitor cells stops creating bone-producing cells, and instead create fat cells. Furthermore, a protein called Cbf-beta was discovered to play a critical role in maintaining bone-producing cells and was found to be drastically reduced in in the bone marrow cells of aged mice.


Understanding the cause leads to new therapy

If the Cbf-beta protein could be isolated and developed into a new therapy, it could be used for preventing age-associated osteoporosis that is associated with an elevated creation of fat cells.

To research this finding in more detail, three mouse models were used with varying degrees of Cbf-beta deletion at different stages of the osteoblast lineage. All three mice showed severe osteoporosis with an accumulation of fat cells in the bone marrow.

Lead UAB researchers, Yi-Ping Li and Wei Chen, believe this knowledge of Cbf-beta can help better explain the underlying cause of osteoporosis in older adults.

Osteoporosis: Causes, symptoms, diagnostic tests, and how to treat
Can osteoporosis be reversed? 12 natural ways to treat osteoporosis